A place to keep us informed of the goings on in your tanks. - Tank Logs
Post Reply
132 posts

You can buy very fine mesh bags with draw strings on them, fit one over the end of the syphon tube and tie the draw string tight round the outside of the tube. Shouldnt pull any fry in.
Top

Yes - I might very well try that, KB. My syphon hose has a comb on the end of it which would hold the drawn string qiite nicely, I think.
Top

A couple of things maybe worth noting ...

About four days ago it became apparent that I couldn't find any of the newly-hatched fry that I'd transferred in the preceding few days.  One of the growing-on fry is looking particularly fat and smug.

I thought I'd watch the next transferee carefully to try to see if my suspicions were correct but it was at that point that the supply of them appeared to cease!  That this has followed the raising of the temperature in the parents' tank may be entirely coincidental, but I've now begun to reduce the temp there again to see what happens.
Top

Time for an update …

Production of eggs seemed to restart after I returned the temperature in the parents' tank - though that may be a coincidence.

I confirmed that new fry that I was adding to the nursery tank were being munched : so we can say that these fish can eat their new brothers and sisters when they're around 43 days old. I've now set up a second nursery tank next to the first.

It's clear that if I'd wanted to try to get all the fry growing at the same rate, I haven't been doing sufficient water changes to dilute the somastatin (a hormone excreted by fry that inhibits the growth rate of other fry).

I stopped adding infusoria quite some time ago. Their diet now consists of my ground-up mixture, microworms and (just lately) some small Bugbites - the ones in the pale blue container. The littlest particles of that are taken straight away ; the others sink to the floor and provide hours of amusement as the fry gradually peck them away to nothing.

Anyway, here's https://youtu.be/nuMRwhS6P_g a short vid as of this morning (I haven't yet worked out how to embed a video in the new version of the forum!) ...
Top

Should see a button in the editor now.

Whats the moss you using in the last tank?
Top

Matt : it's mainly Java, but probably has other kinds mixed up with it (though I can't make out anything obvious when watching the video back).


We left our story as I'd raised the temperature in the parents' tank slightly and the production of fry had restarted. It did turn out to be a coincidence because a few days later it stopped again!

I carried on dutifully shuttling the bunches of moss between tank and tub for a while but no more fry appeared, so I gave up ; I'll give it another go presently. I had about ten fry in the second nano tank I'd set up so I left them there. They did noticeably grow faster than the much more numerous ones in the initial nano tank though.

Today when inspecting my 'Guilt' tank I saw tiny movement. I don't know who is responsible for these fry so to find out I thought I'd try to rescue as many as I could before too many little appetites became whetted!

The obvious place was the second nano tank that had the ten Improbabillity Fish in it. They went into the tank next door which is now getting rather crowded! 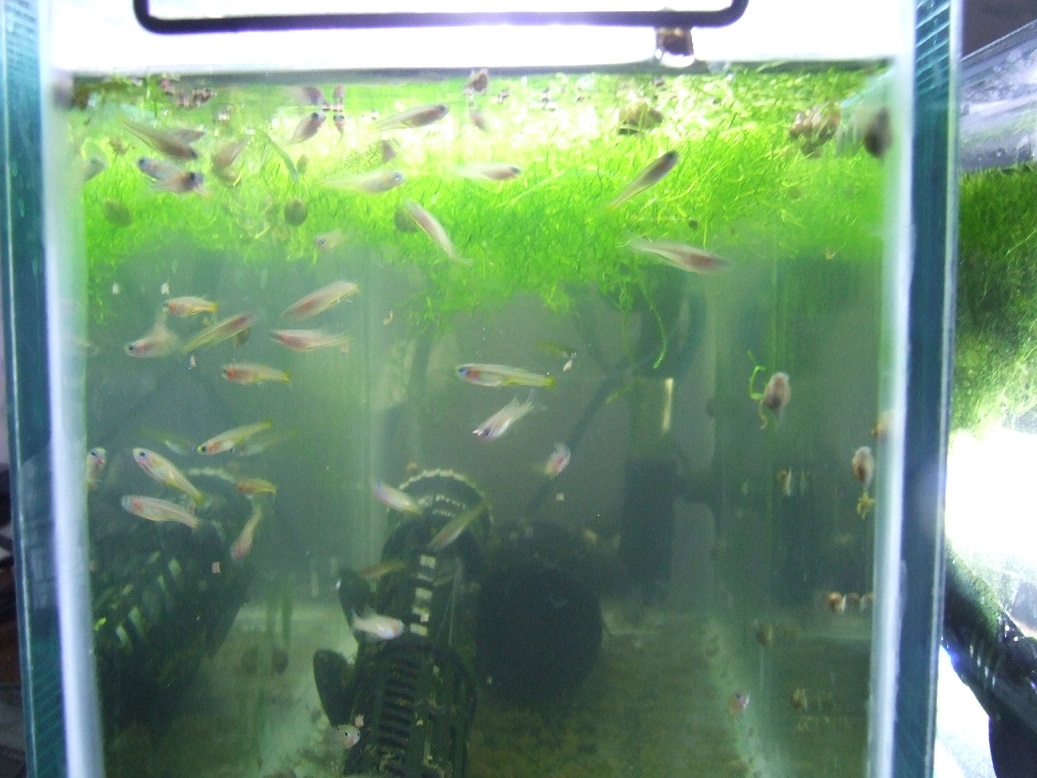 Still, their new residence (Sheba 3) will be ready very soon.

I emptied the second nano, refilled it with water from Guilt and began hunting with a shrimp net. 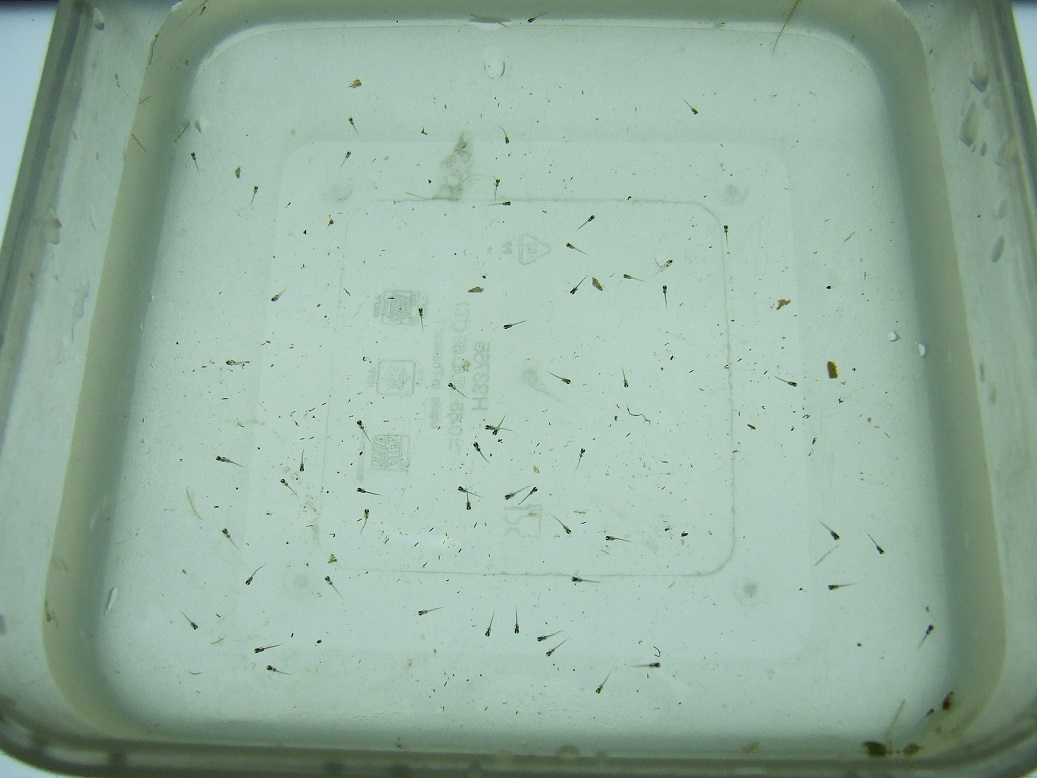 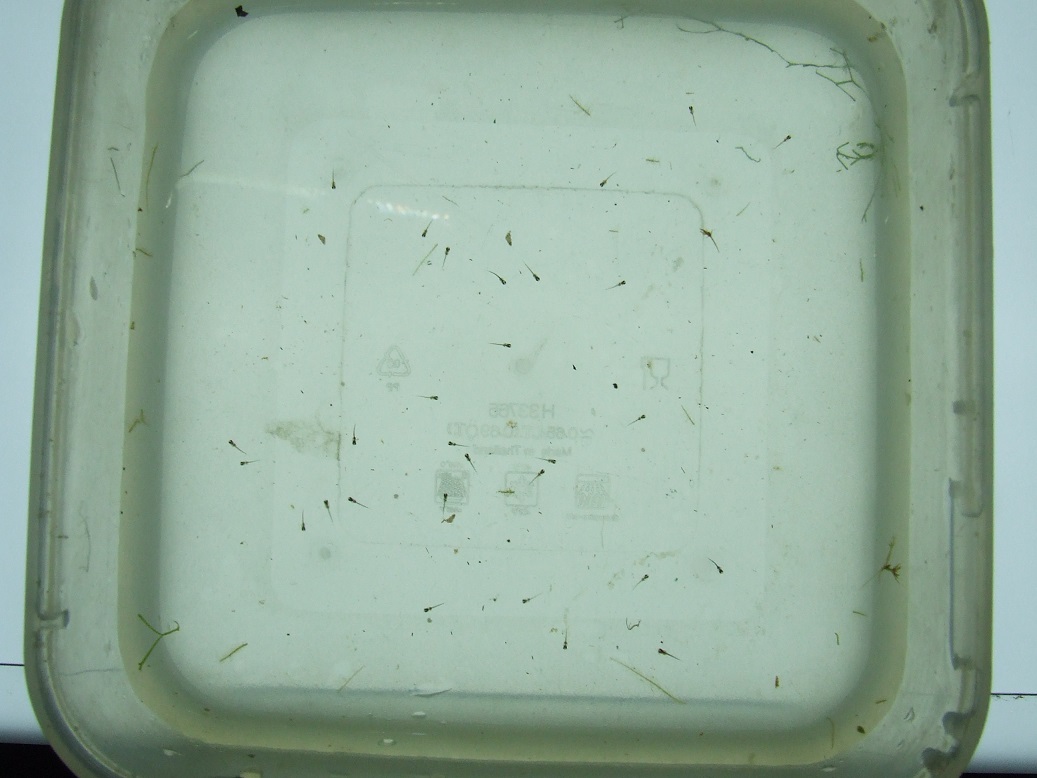 A count of the wee bodies from those still images revealed that I'd managed to rescue over 80 of them. I hope some will make it to the stage when I can begin to guess what they are! Early betting is on Pearl Gourami.
Top

Looking forward to finding out what they are!
Top

Considering you have to faff around with your MK water, you have an awful lot of spawnings!

Latest news on the Mystery Fry from the Rio400 …

They're still tiny but filling out. I tried them with baby brine shrimp this morning but I think those a bit big for them as yet. They are pecking away at microworms though. They've each developed a blue spot on their bum - the spots are still blue even if I switch off the blue LEDs.

I used my phone (I now realise I should have turned it on its side!) to take a quick (1 min.) vid.
Top