Thanks to everyone , it is hard when you loose a pet you love , even a little one like a shrimp .

On the positive side i found another pregnant one yesterday and that really lifted my mood , also did an ammonia test about 24h after removing the filter and it was the same if not a tiny bit better than before .

Found a few people that run something called Walstad tanks that have no filter no co2 and no fertilisation and i will convert to that very soon .

Budget is very tight atm so i don’t have the test strips yet but i will process some forest soil and use that under the gravel to be sure there are no chemicals in it .

If anyone has a Walstad tank do point me to your thread or let me know how it went , i need as much knowledge as possible .

Wish me luck everyone , i hope this works [emoji51]

Stick with the way you are working, trust me it will be better in the long run.
Top

Have a read of this then make your mind up!

Dr. Walstead also has written a book which is a bit heavy going at times but interesting. Amazon has it. I've got a small tank planted but the only occupants are mosquito larva, but the plants look good.
Top

So i got a new dilemma,

As you can see in the picture , that is what i have to work with from the tap . Ideas to get those numbers down ?

After doing some research im thinking if i should exchange the tetras for guppies ? 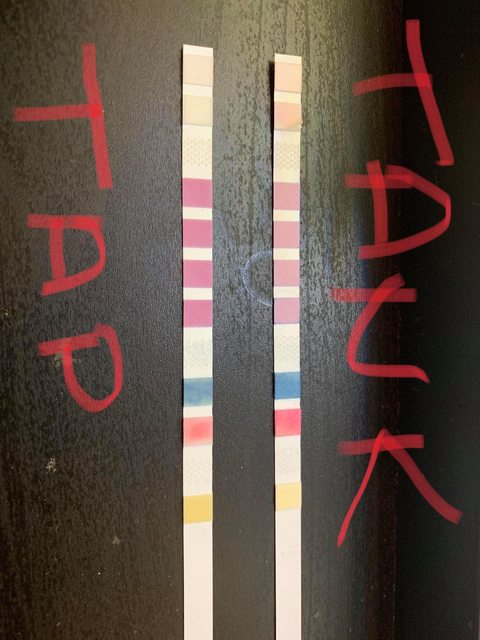 In my experience pH should not fluctuate much over a 24 period unless there us something wrong. 6.0 to 8.0 is probably a safe range for most species but swinging between 6.0 and 8.0 is actually a very big change and probably harmful or at least stressful to most species.

You are right that guppies like slightly higher pH than tetras but i don't think you need to slavishly chase down species specific levels. Most species (there are exceptions) are happy within a range, as long as changes are not too rapid or extreme.

It's the hardness that's relevant, the ph doesn't affect the fish as much, more the spawning activity and sex of fry really.

Most tetras prefer it softer, but you can get away with it with excellent water maintenance, except when there's problems.
If at first you don't succeed....
...get someone else to do it!

All my posts are from a desktop.
Mobiles are way too complicated for me, although I do have one now.

So i've been testing and testing water parameters.

I tried boiling water and letting it cool, took only the top half into a smaller cup with a tiny hose so the settled minerals would not get sucked up.
This produced about 10% better water than the tap so it isn't something i will pursue.

Then i distilled some water in a pot, got about 20-30 ml after a 15 min boil with a very rudimentary setup but this produced the results in the picture below:

If this setup produced these results then bottled distilled water will be even better.

The plan now is to mix half distilled with tap and find that result, eventually reaching a mix that will give me softer water for the tank at which point 10% water changes will be made daily toward my goal to half the hardness of the tank.

Also this is what it looks like without the filter, trimmings added to the empty space

PS. Yes i added another suction cup with elastic band onto the heater , if it falls off again i will bite the top off it like Ozzy did with that bat one time.
I also found Walstad's book as a pdf for free ! This will be a good read 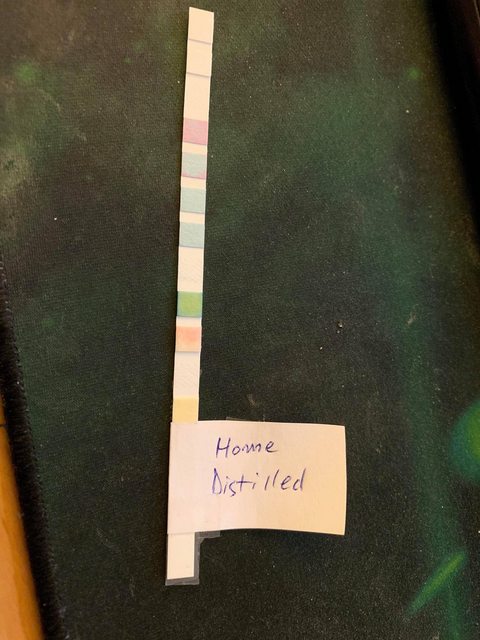 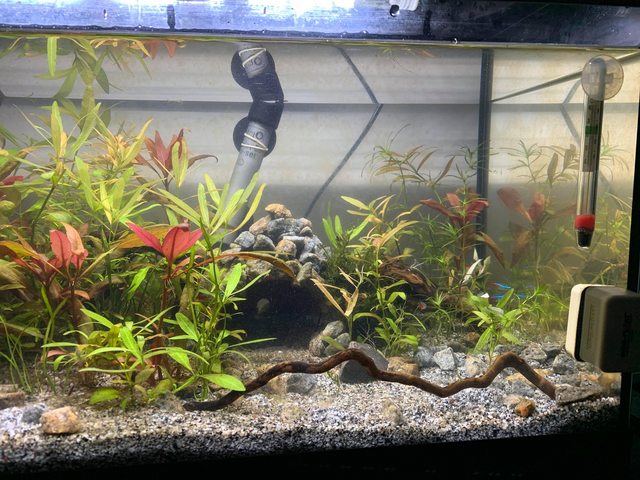 Be very careful doing too many water changes with shrimp.

All my posts are from a desktop.
Mobiles are way too complicated for me, although I do have one now.

So again i change my mind like a pregnant woman, filter is back in along side a dual sponge filter so it can cycle. When the sponge is done i will remove the big one.

Added 20+ new dwarf shrimp of mixed colors 2 days ago and they seem to be doing well so far and i started a new little project.

I found live artemia in a pet store sold as food in little bags so i bought 3. The tetras absolutely loved hunting them even though some were too big to fit in their mouths so i decided to try and keep artemia. Added 1 little bag ( about 25 adults ) to a 1l jar with 1tbsp of clean sea salt and fed them a little wheat flour, hopefully they will breed and ill have nice natural food for my fish.

Today i'm going to the forest to get some dirt and prepare for the Walstad tank setup.

Also relocated the tank to the other side of my office , hope that desk can take 2 55l tanks. Reinforced the desk with 2 old lenovo pcs on top of a night stand

.
As the tourist season is cooling down and i have more time i'll begin designing a stand to hold 3x55l long tanks or 2x55l longs and 1x30l cube in the middle.

Mordor is still on hold, i am thinking to wait and gather more experience and money. The current plan is to get my hands on a 250l or larger corner tank as that will offer much more depth to the scene and room for me to hide all the gear the tank needs. 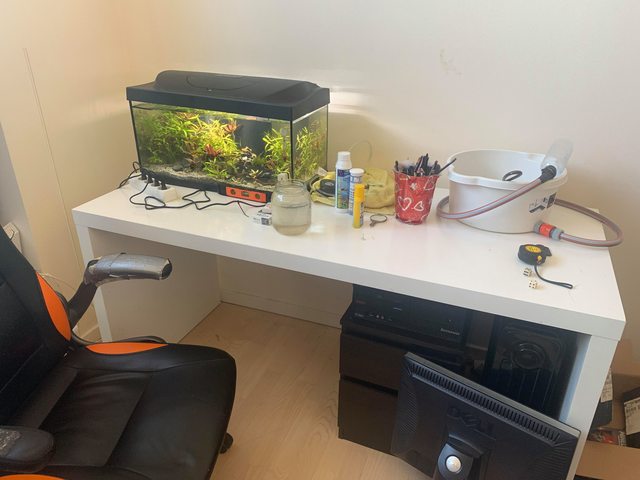 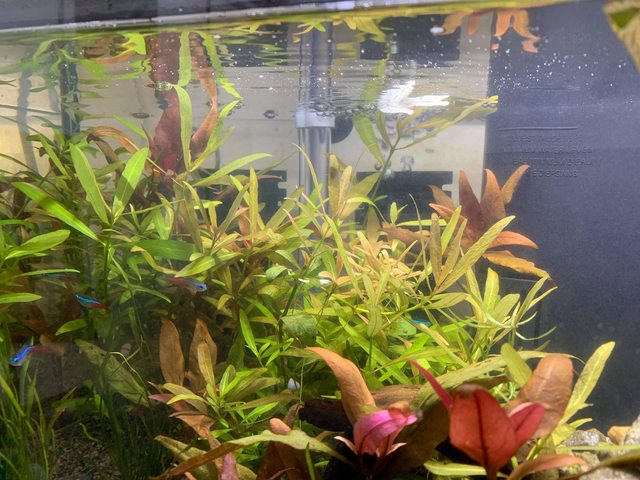 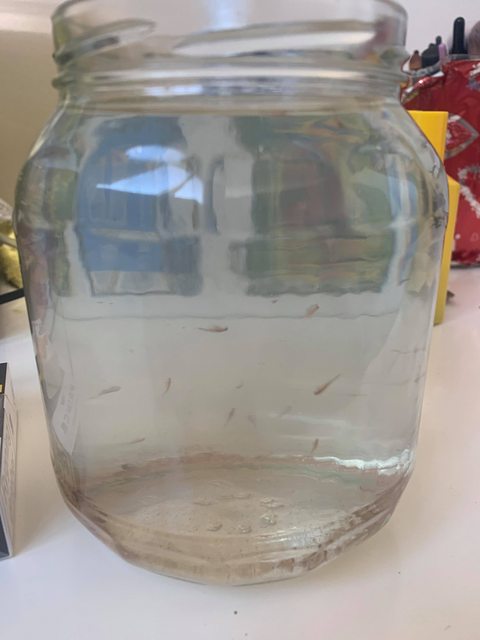 Get an aquarium they said , its not addictive they said [emoji1787] NEW 54l on the desk and a disgusting 19l that needs polishing and lighting [emoji51][emoji51]

So let me tell you about it. I found the nicest old lady selling this Aquael Leddy 60, went to meet her and ended up getting the tank with original light and 4 filters for basically 25 pounds( 200dkk ). Her husband was getting older and couldn't care for it anymore so she gave me a killer deal. The basic design of it is there but it needs some more stones so another trip to the forest soon .

It will be stocked with amano shrimp and guppies.

The 19l i got for almost nothing, it was scratched up and the light is dead. Did a little polishing on it and it still has a little cloudiness in the plastic but it isnt bad at all. 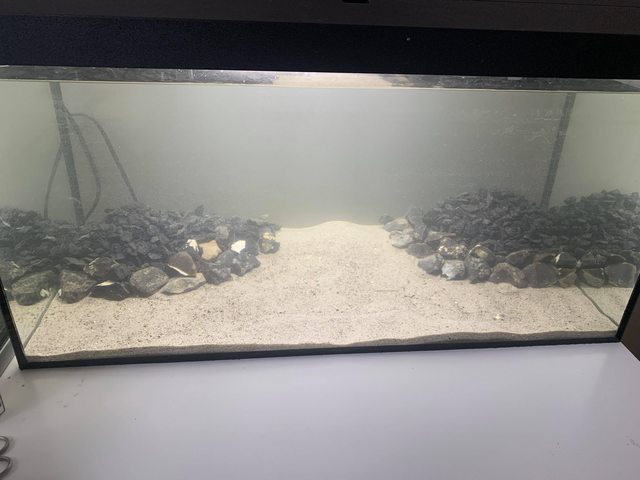