Time for a new update

This is the best pic i got with 3 of them hiding in the stones on top of the cave i made, good work well done. Those rocks are 1-1.5 cm garden pebbles. 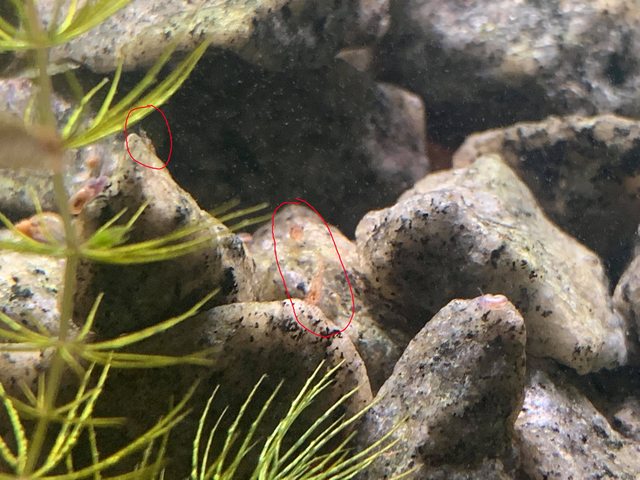 The snails are out of control, at this point i think there are around 200 of them in there. Not that i'm complaining , they clean the tank like an f1 team can change tires but they are breeding too fast. From what i read, assassin snails are not hermaphrodites so a single one will not produce more, one will be introduced to both tanks to slowly get the others under control.

Black Hill Crossing got more stones on the right and i'm in the market for some ideal wood to make a bonsai for the left side, also thinking of adding more sand and carpeting with Dwarf Hairgrass ( Eleocharis Parvula ) 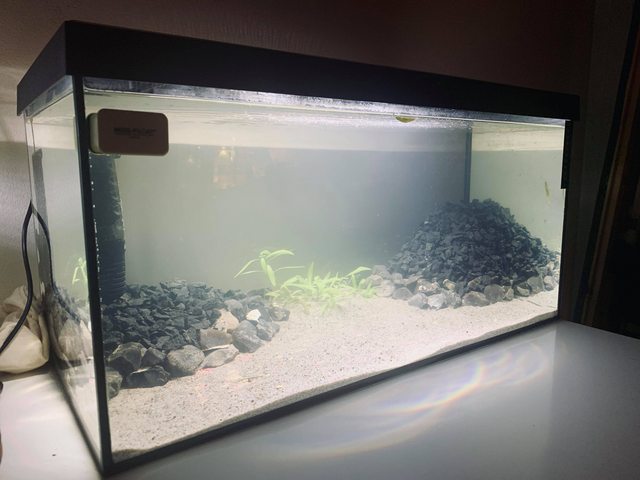 A quick question for all the creative people here.
I have an extra Eheim pickup 45 filter, what would you do to supercharge this thing and get 3x or more bacteria capacity from it ?
Having 2 of them i am currently running the sponge material from both stuffed into one, that one is filtering Tropico atm because the air pump was too loud to sleep with.

Any and all ideas are welcome

I curate the world's largest collection of Eheim Pickups currently in private ownership!

I'll have a play in the next hour or two and see what I can come up with.

[Edit : I've given this some thought and am going to attempt to build an experimental prototype of a possible solution ; my initial thought of a simple arrangement of sponge-and-cable-ties didn't really do it for me. It'll be a x2 rather than a x3 - just to see if it works. It'll keep me off the streets for a few hours, anyway! This shouldn't discourage anyone else from proffering suggestions, of course.]
Top

So this is the monstrosity i came up with. Made a little box and fitted half of my sponge filter to it so the pump now has to draw water through the sponge filter before anything. I think this might be 3x [emoji51]

My initial thought was: is it possible to increase the surface area for filtration within the existing volume of the filter housing?  The answer came back : yes - use sand.  Then I realised it would clog pretty quickly even if the pump were able to draw water through it.

Then I considered adding some sand to the filter sponge. It's open-cell, so with determined wiggling it would be possible to do that. But would it be enough? Probably not.

So extra media has to be added outside the filter housing.  Attaching lumps of sponge across the filter intake with cable-ties would kind of work but would look ugly.

Like you, I came to the conclusion that a supplementary filter box was the best bet. The design of the Pickup's filter intake makes it difficult to attach things to it efffectively, in such a way that taking the filter apart for maintenance would still be easy. I like your 'horizontal' solution to that ; I'm attempting a vertical one.

I began playing. If I had some, I'd have used 2mm perspex (its slight flexibility would be very useful ; but I don't, so I didn't! But I do have loads of offcuts of 3mm glass, so I'm using that.

By mid-afternoon I'd got something vaguely together. Then I saw a flaw and scrapped it! The next incarnation is in progress. There are subtle angles and curves that you don't realise are there until you try to marry a straight edge to them! As a result I'm 2mm short in one of my measurements. I'll try to pack it out with aquarium goo if I can, so that I can have a go at seeing if it works.

I'm actually quite pleased with what I've done so far : 'pleased' in the sense that what I'd imagined has happened (though if I were to do it again there are one or two improvements that I could make) ; and pleased in that I can see that it's scaleable - though in practice it would be simpler just to buy a bigger internal filter!  As it is, I have in fact achieved your brief of 3x the amount of sponge, GDK - so I guess that's another reason to be pleased!  The final reveal will have to wait until the results of a couple of side-trials are in and (if successful) implemented.

They're shown in the pic that follows.

Left-hand side-trial : My filter box has baffles that are meant to direct the flow through as much of the media as possible. But I had to compromise slightly by: a) reducing the number of baffles that I'd intended ; and b) making one of the baffles shorter so that I could get the sponges into the housing!  It would have been great if, somehow, I could have made the front of the housing completely detachable.  So what's happening here is an attempt to see if I could do that by using those strips that re-sealable placcy bags have.  I'm not hopeful that aquarium goo will actually bond to the plastic that the bag was made of, but you never know unless you try!  Can you think of another way I could reliably have done this?


Right-side trial : I need to seal my confection where the Eheim filter housing sits in the extension that I've made.  Originally I'd thought of lining the junction with a thin section of foam, sticking it down with aquarium goo, and ramming the Eheim housing into it. What you see here in the pic is a glob of aquarium goo between two pieces of glass, one of which has been wiped with Vaseline. I'm hoping the Vaseline will prevent the goo sticking to that piece of glass.  If successful, I can try to make a custom seal by daubing the relevant bit(s) of the Eheim housing with Vaseline, inserting it into the extension and filling the gap between the two with goo. When it's cured, the Eheim housing should lift out, leaving an exactly-shaped seal.  It would be nice to have some low-modulus (i.e. more flexible) aquarium goo for this but I don't have any. In fact - does anyone know whether such a thing exists?  As I mentioned before, if I were doing this for real, I'd use 2mm (black) acrylic ; this is where its slight flexibility would help.   Is there a better way of creating this seal, does anyone know? 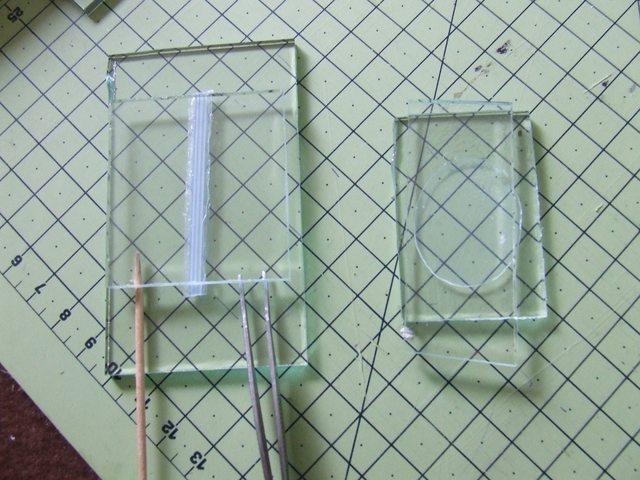 I still might end up having to use a cable-tie, or an elastic band, to keep the two components firmly together, but we'll see ...
Top

Wow , you are really my kind of diyer.

That seal would probably be best made with a piece of plastic that is 20% thinner than the glass that its for and to make it not stick im thinking baking paper or baby powder, if all else fails use cling film and leave it in.

Overall i am really excited to see what kind of frankenstein comes out in the end.

I have 2 of those eheim 45s but where is the fun in having 2 when you can make this ridiculous hybrid thing that mkes people go WTF ?!

My prototype has been running very well since yesterday. It is 24 hours in now and i see a lot of poop collecting on the sponge and it provides a gentle flow to keep the water moving and the tetras entertained. Next i want to make a version that looks better and is overall thinner in profile. That is another reason why i want this, i wouldnt mind a filter that covers a whole side but is thin and will not take up too much space towards the middle.

I don't think I'm going to have much success with the re-sealing strip thing.  It's the polythene-type plastic (of the cut-away bag) still welded to it that may be the problem.  Aquarium goo didn't stick ; goo that you cure with uV light didn't stick to it ; nor did a superglue type stuff.  I wonder if it would be possible to get hold of some of the strip as it is before it gets welded to plastic bags, just to try and see.

The Vaseline has done funny things : the goo has stuck to the glass through the Vaseline in places ; elsewhere it appears to have inhibited the curing. Very strange!  I wrapped the bottom of the Eheim in masking tape and that looks a possibility. I've taken it off again and will play with plastic tape (insulation tape, maybe) tomorrow.  The gaps to be filled aren't even all the way round because of the shape of the Eheim filter housing, so whatever makes the seal has to be able to conform to the weird shape.

But look - I can't have you in suspenders all night, so here's Frankenstein as he is at the moment (forgive the messy gooing - it wasn't a priority to get it looking good!) : 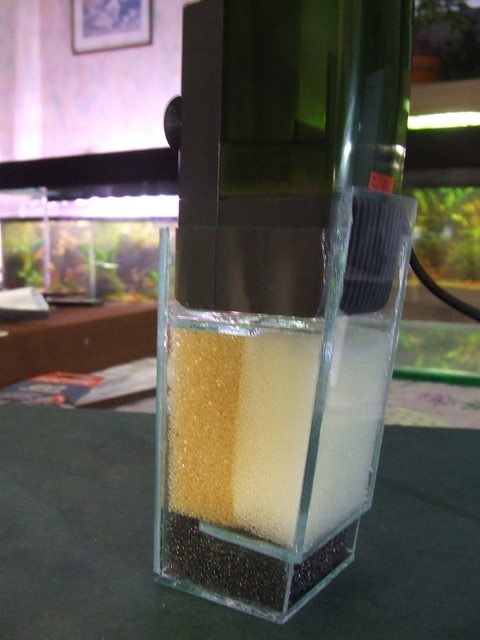 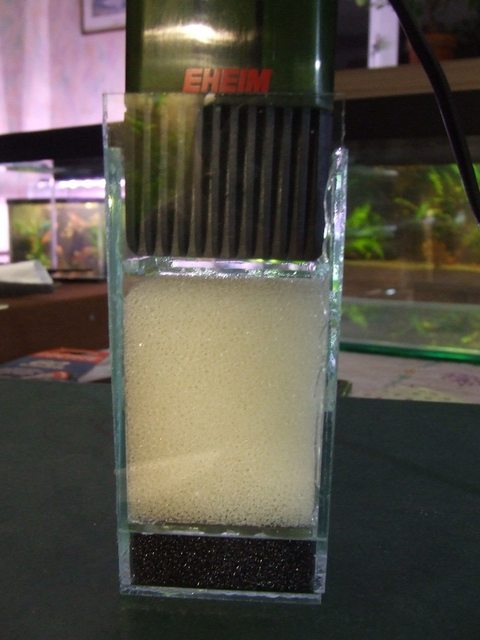 For your last point : if you don't know it already, Google 'Hamburg Mattenfilter', or 'HMF'.

I have my own peculiar version which is fed with water not locally but from the other end of the tank and has spaces to hold bags of extra filter media.  If I may borrow a pic from another thread, you'll see vaguely what I mean (though this example is still waiting to be commissioned, so it doesn't have its pump, heater and extra media yet): 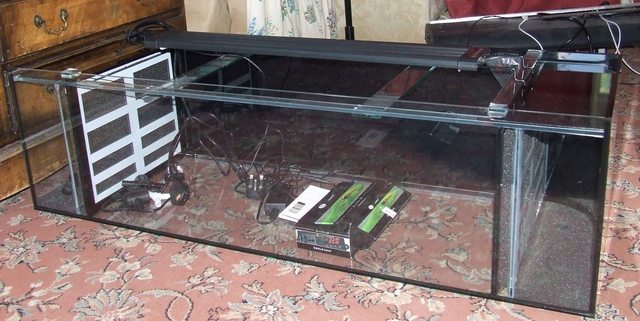 It'll look a bit better when the white protective film is removed from the black acrylic frames, and when the end compartments are hidden from view!
Top

Well lads i went to the store today and picked up 6 more corydoras so now they should be happy as a group of 8. Tropico is now fully stocked with 10 neon tetras, 8 corydoras paleatus, shrimp and snails.

As i was looking around i couldnt help myself, i had to rescue one betta from the little 5-6liter prison and give him a better home in my nearly empty 55liter, paid close to 30£ for him but i regret nothing [emoji51]. His name is Mr Big ( my mrs named him but i agree XD ). Now Blackhill is also stocked with a betta and shrimp. He seems to be a bit of a prick, the first thing he did was chase the shrimp around for a bit but character is definitely a plus in my book. Turned the filter around to make the current less strong around the tank for him and i might add a sponge to the output of the filter if he seems uncomfortable.

Really looking forward to all the research i have to do now and the joy of caring for this magnificent creature.