A place to keep us informed of the goings on in your tanks. - Tank Logs
Locked
113 posts

I have a little spare time this morning so thought I would 'bite the bullet' and start a tank diary,

I have 2 tanks, 180l small fish community and 350l medium fish community, both tanks are well stocked, there are plans in the pipeline for a change but this will have to wait until things at work are more settled, so this wont be a tank log as such with lots of exciting happenings more just a diary, a place to put some of the many photos I take of my existing fishies, I hope that's ok?

A bit of background first, I blame my uncle for much of the original interest, he had a fish room in his garage stocked with many tanks, he is a catfish lover so many of them appeared empty, but some contained 'normal' fish, also very excitingly for a child one contained a axolotl, I still think these are like creatures from outer space!

Got myself a tank at the first opportunity, this one was done on a shoe string with a second hand tank and fish, I enjoyed it but it only lasted about a year before I had to sell when we moved to the current house which needed much refurbishment, about 13 years ago.

Then about 3 years ago decided the time was right for another go, things have changed since my last attempt, and mostly for the better, it does seem more expensive, but perhaps its just I'm prepared to spend more this time round! There seems a much better choice of small and nano community fish, but the biggest change is perhaps the information and support available online, this makes things much more interesting and accessible, though sometimes advice is contradictory and other times there is reams of information to sift through, the fact you can hook up with other people with the same interest is a great thing, most of my friends/ colleagues think fish keeping is well, a bit weird.

I'm digressing again, back to tanks, so a little over 3 years ago I came across an irresistible bargain! and ended up with 2 second hand tanks of about 60l, I started off with 3 pearl danios and 3 Sterbai corys in each of the tanks, it soon became obvious that the danios needed more space so after 6 months I upgraded to a Jewel vision 180l which now resides in the lounge it just perfectly fits in the alcove between the chimney breast and French doors and yes it does suffer from algea, more on that later,

If you have read through to the end of this you deserve a gold star! Just off to find a pic of small tank..
180l small fish community
350l Jewel Rio jungle tank
420l 6ft river tank - lake kutubu rainbows, scissortails.
Top

When I upgraded to the 180l I moved in the existing fish then gave one of the tanks to my cousin which started her off on her own journey so I'm partly to blame for that but she did say she wanted it!

I kept the other one for at least another year partly as quarantine and partly for some lovely nano fish, about the best were the little river gobies that used to bury themselves in the sand with just the eyes showing they were very entertaining

Eventually I sold it with it's remaining fish but I think now perhaps I should have stored it in the garage or something as it was quite a nice tank, never mind, I have found a picture, it used to reside in the hallway where it was in constant danger of getting bashed, plants are fake and used to gunge up quite quickly and it had some scratches on the glass, but it used to look good especially with the blue moon light on 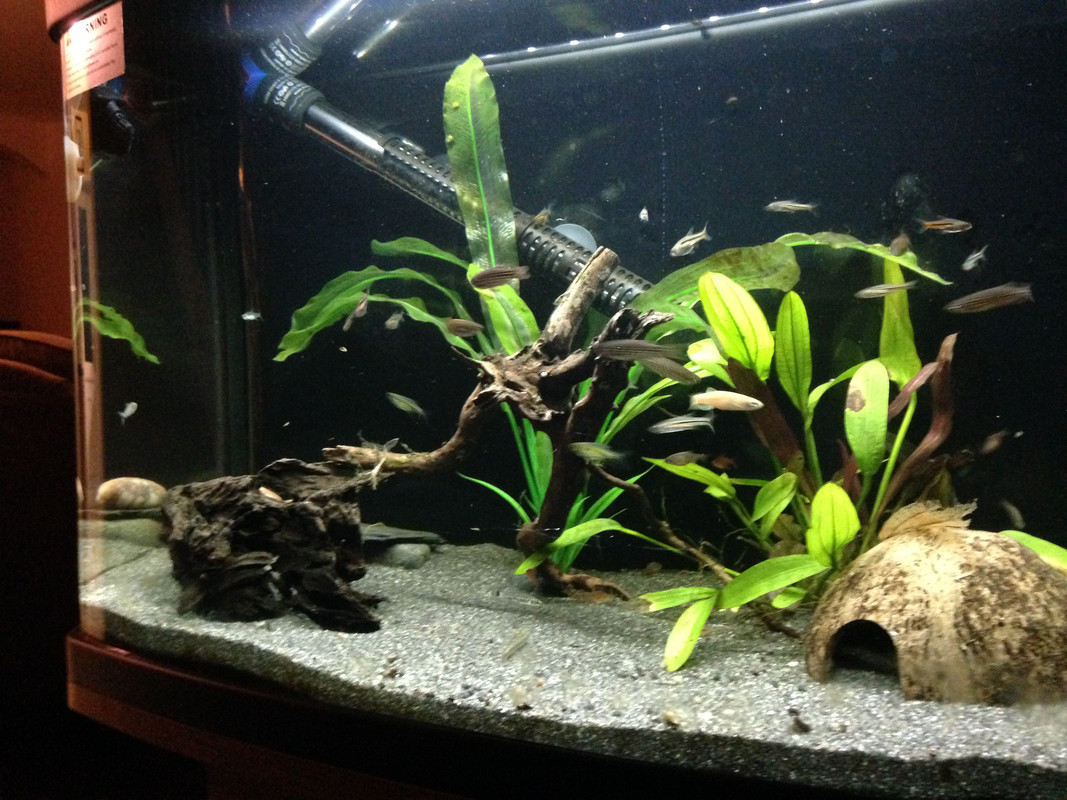 By the way, having earn a gold star reading your small post, you can get a long service medal for reading mine.

New year, new puddle
You know when your getting older when you start talking about growing house plants!

I've read your log Martinspuddle and most of the logs on the first 4 pages, which has kept me entertained for a while, just checked back for a reminder, how did you find the X-ray tetra's as they are on my possible list for the future?
I've run out of time now so will have to update this log later...,
180l small fish community
350l Jewel Rio jungle tank
420l 6ft river tank - lake kutubu rainbows, scissortails.
Top

Seriouslyfish.com - Pristella maxillaris
You know when your getting older when you start talking about growing house plants!

)
Good start to the log btw, i’ll look forward to its progression

Thanks for the info, they can remain on the wish list - it never seems to get any shorter, I might cross one off but then I see something nice and another one gets added

So I've had the 180 for about 3 years, it's a great tank, I like that when the sun is on it, because of the curvature of the glass I can only see the middle section, so fish appear to swim in and out of the gloom that is on either side, also the colours look different in the daylight, tank lights go on for a few hours most evenings after dark this is the best time to see the whole tank, luckily this is when I am most likely to have the time to do some watching, also I spend some time last thing watching them just after feeding as this is when I might see the less confident fish,

Because of the tanks position it has always suffered from hair algae, about 6 months in I got 2 Siamese Algae Eaters - what a difference, no more issues until I transferred them to big tank about 8 months ago, predictably after a few weeks problem was back, tried a few things with no change, a couple of months ago I got a couple more SAEs I see them eating it but as yet they are too small to make a difference, so recently I decided to try something new, I have 3 pieces of wood so I took 1 out cleaned it up a bit then dumped it in big tank, after 2 weeks it was picked clean, why did it take me so long to think of this?
This week the second much worse log has been dumped in big tank to see if the bigger fishies can make themselves useful again, it's not just the SAE's I have also seen the black ruby barbs at it and as a side bonus the loaches can enjoy some snail hunting,

This photo should make you all feel loads better about your own tanks, it shows the state it was in a few weeks back, there is 2 separate pieces of spider wood with Anubis attached, at first it was good to watch the fish swim in and out of the branches but since the Anubis and algae have taken over the effect has been lost somewhat! 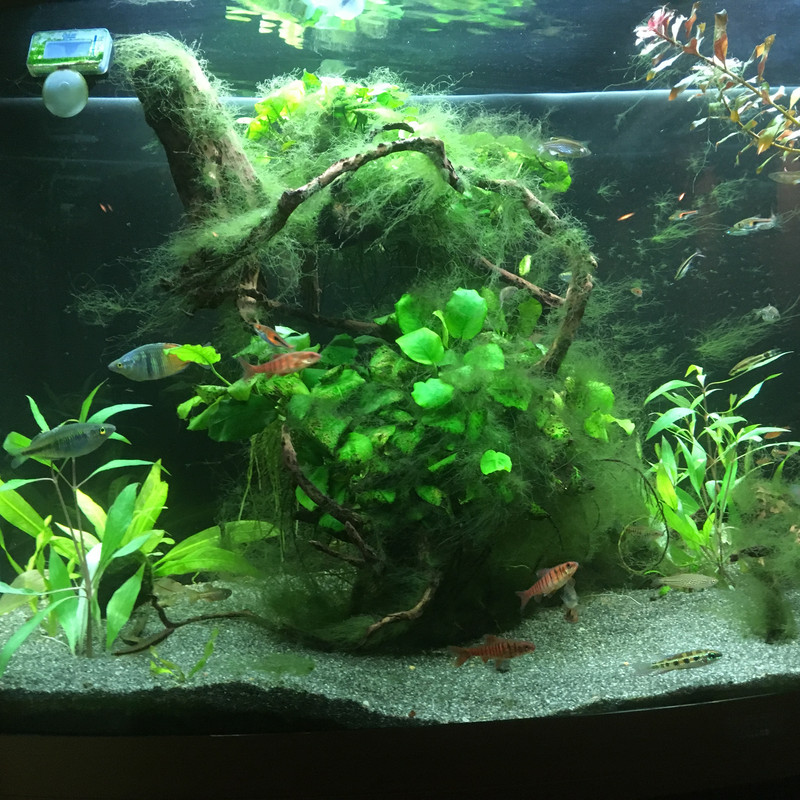 This picture was taken earlier this week, top log is back in after having it's big tank special service, I was worried about lack of cover so added a half coconut, no doubt some people would still think the tank is in a terrible state, but for me it's fine I am quite relaxed about having some algae so long as it doesn't take over, it does not bother me in the way it would for some people, just as well really or I would have given up long ago, anyway here it is 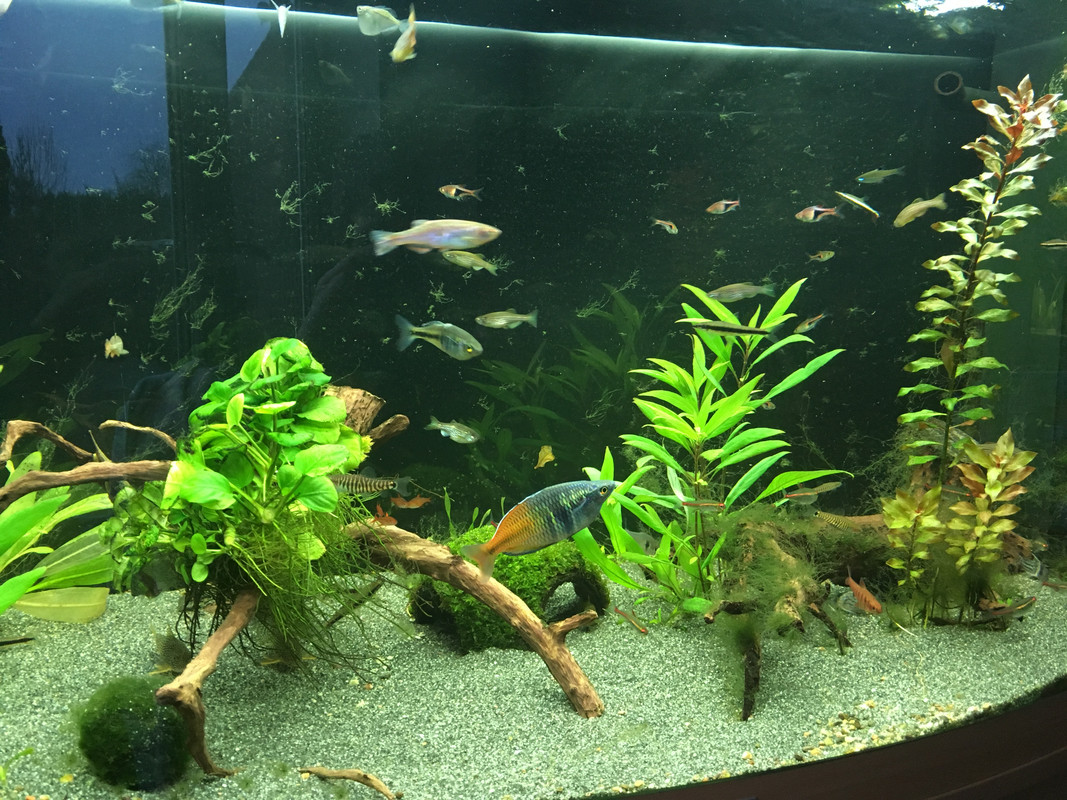