On closer inspection they are on the Porites and on the Montipora, and the ones on the Monti are nearer the glass so easier to photograph.
I have managed to capture two of them, though only one of them is clear(ish) in the photos.
You're looking at the almost transparent thing in the rectangular tube made of sand. It appears to have a head with eyes and appendages.
For scale, the Montipora polyps are about 1mm across, so this critter's head is about 1mm by 0.5mm. 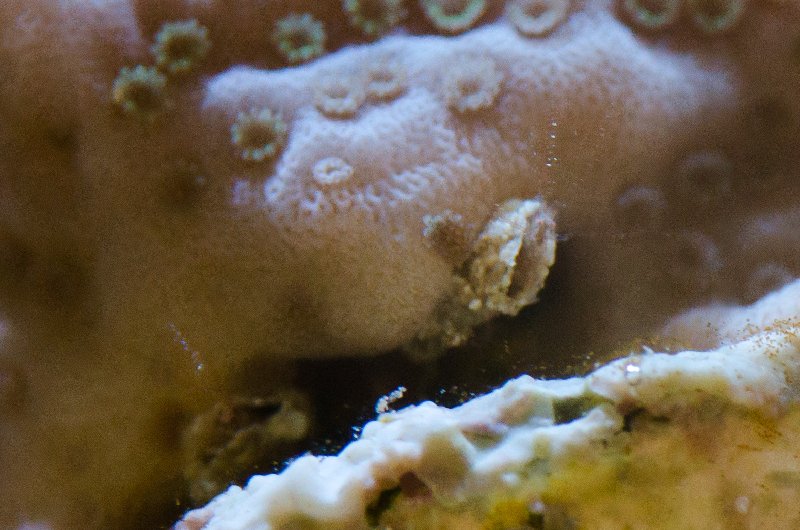 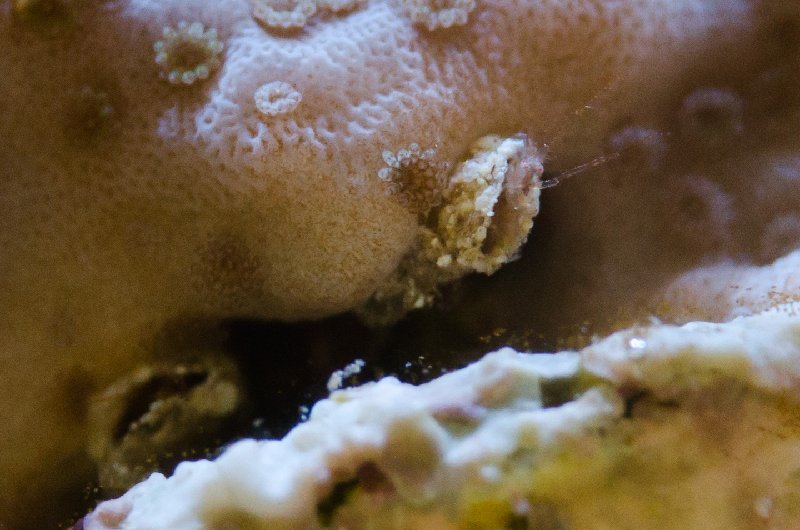 Any idea what they are? They aren't out all the time, sometimes they retract into their tube.
Top

I have no idea, but it looks like it has the same crazy eyes as Dr Doom from Roger Rabbit

terebellid worms or vermetid snails would be my guess.
Back to Basics
Fr499y’s shrimp tank

Thanks! I don't think it's a vermetid snail, I've had them before and their tube is more like a straight snail shell, whereas this one is bits of sand stuck together.
I've had worms that make the sand tubes before, so I think that seems more likely. Hopefully they won't turn out to be monsters.
Top

I recently splashed out on some new inhabitants for the salty tank. It's been running 6 months now, and has settled down really well (famous last words...)
Here's one of the Montipora frags that has been growing for a couple of months and is doing really well: 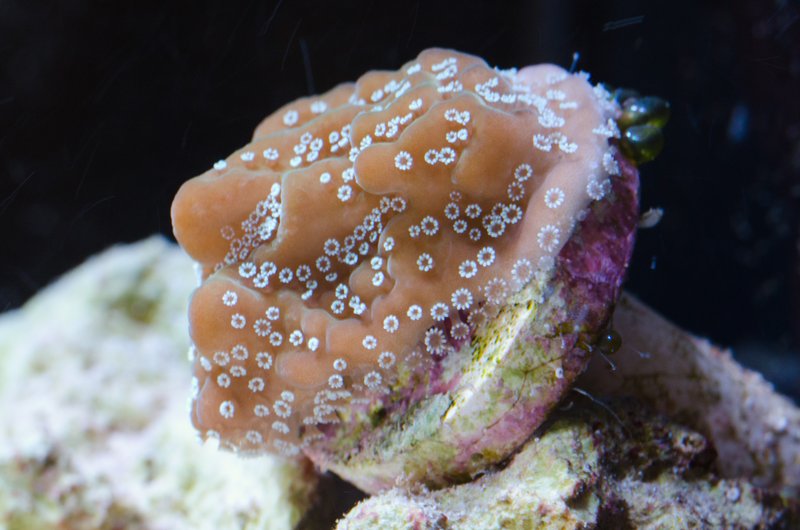 I bought a mixed lot of snails and a spiny brittle star, because the CUC population of the tank was previously rather low (about 5 snails in 200L). I thought the starfish was going to be a couple of inches across but when it arrived it was bigger than my outstretched hand! The starfish loves the mound of porous rocks and I often see an arm or two protruding from the gaps between them in the hope of snagging some passing food. I think I will need to up the feeding a bit to keep it going, but it will be hopefully do a good job of scavenging leftovers: 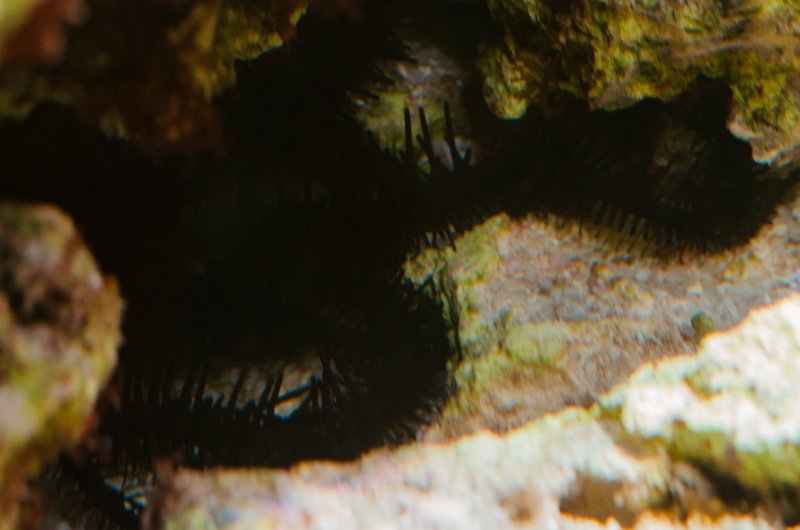 The purple Porites I've had for a few months is doing really well and has spread onto some adjacent frag plugs (as I had hoped): 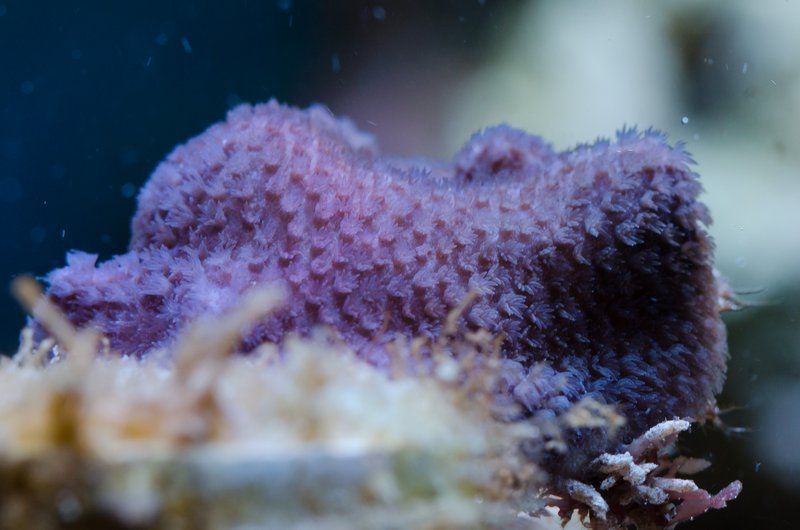 So I bought another Porites, this one is greenish-yellow. It has settled in very well and is already showing good polyp extension: 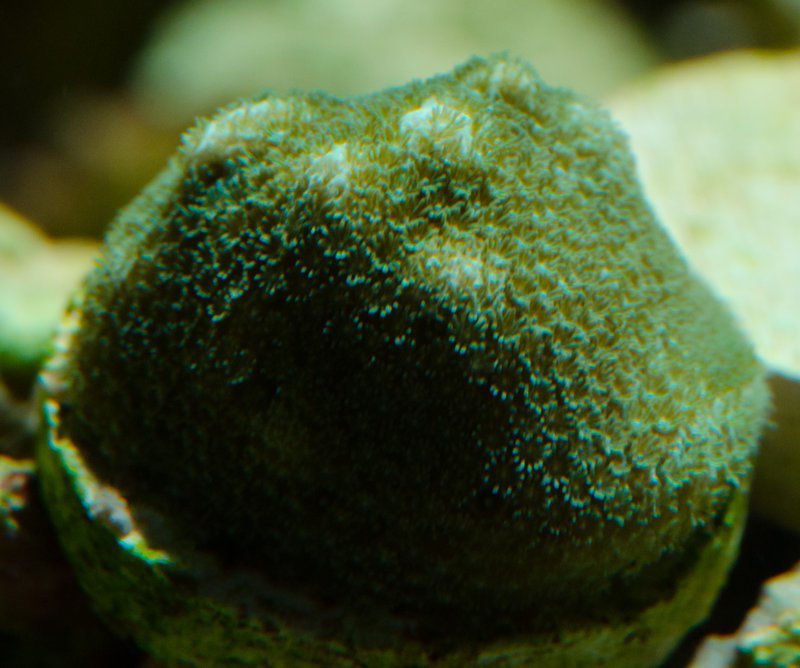 I also thought I would try my first Acropora, a genus I've never kept before. I bought a small bluish Acropora Tenuis frag, which seems to have settled in well so far. I will move it up closer to the light in due course: 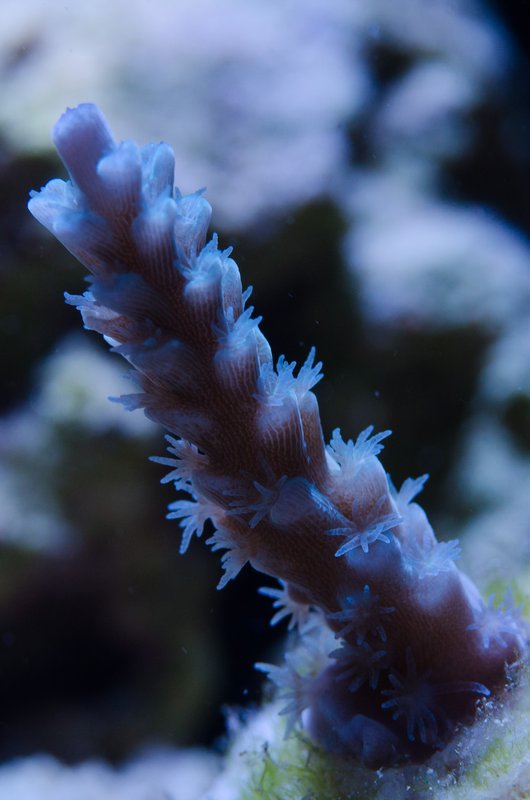 And finally, considering this is a Maldivian biotope, I was unable to resist a Pavona maldivensis. I have kept Pavona before in my old tank, though not this species, so I hope I can keep this one too. It's bigger than I had expected. It actually came with a hitch-hiker brittle star that was about 2" across and free - if I'd known I was getting this I might not have bought the big one! 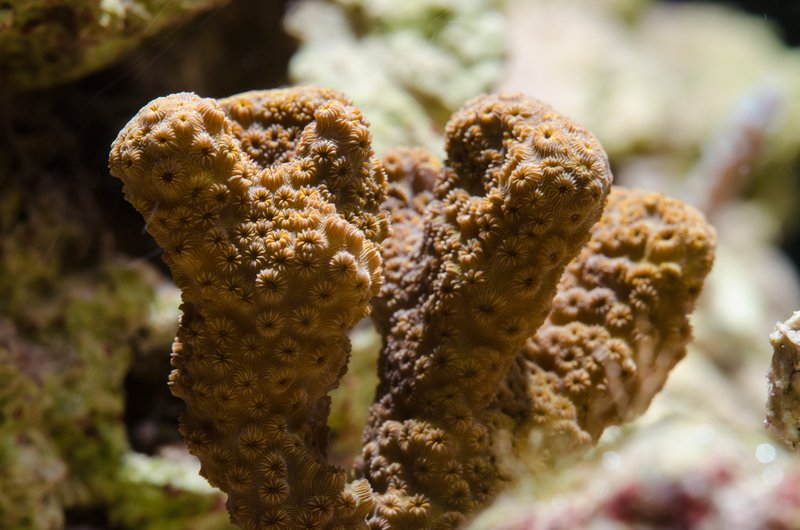 I think I will need to start feeding some of these corals a bit, but I'm rather out of touch with coral foods, especially since mine are almost all small-polyped species. Any recommendations?
Top

This morning I received some more items for the Maldivian salty tank.

With continuing restrictions on the use of public transport and me not having a car, I have resorted to mail-ordering fish for the very first time (though I have bought corals and invertebrates by mail order before). In fact I ordered these from Germany as the supplier had exactly the species of fish and corals I was after for my Maldivian biotope. The delivery was exactly as promised and the livestock seems healthy though the fish have slightly tatty fins. They have settled in and are all eating well, which is good.

I bought two largish frags of Pocillopora verrucosa, and a shoal of six Chocolate Dip Chromis. Both of these were species that I saw frequently in the Maldives, often with the chromis inhabiting a big stand of the coral. It'll take a while before my coral grows big enough for them to do that, but in the mean time there are lots of hiding places in the rockwork should they wish to spread out. 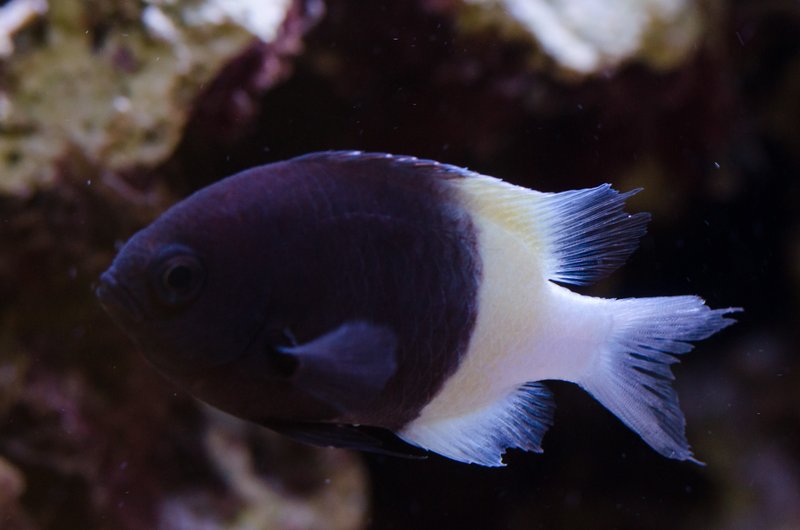 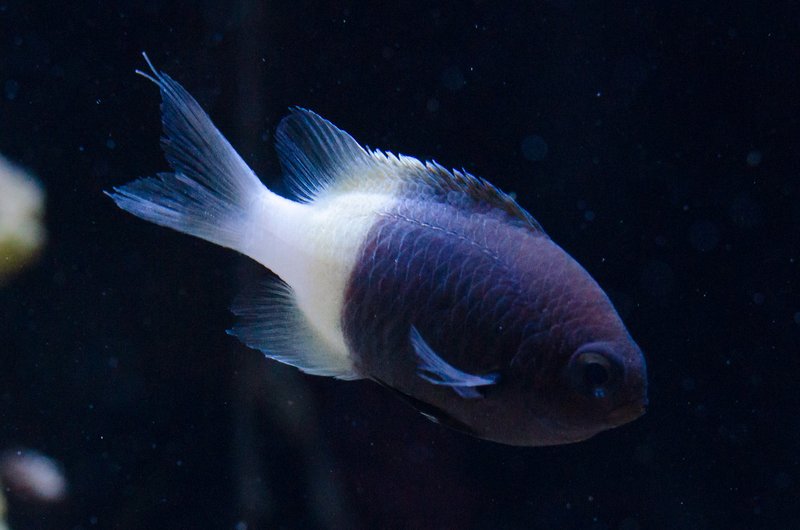 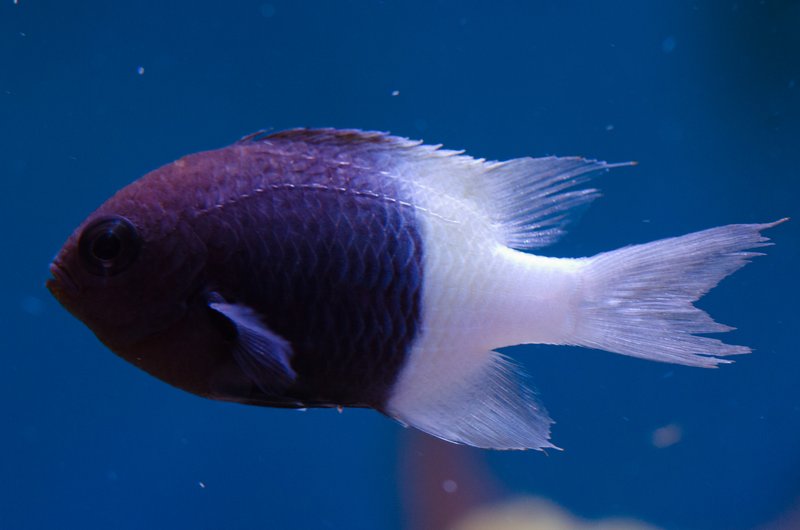 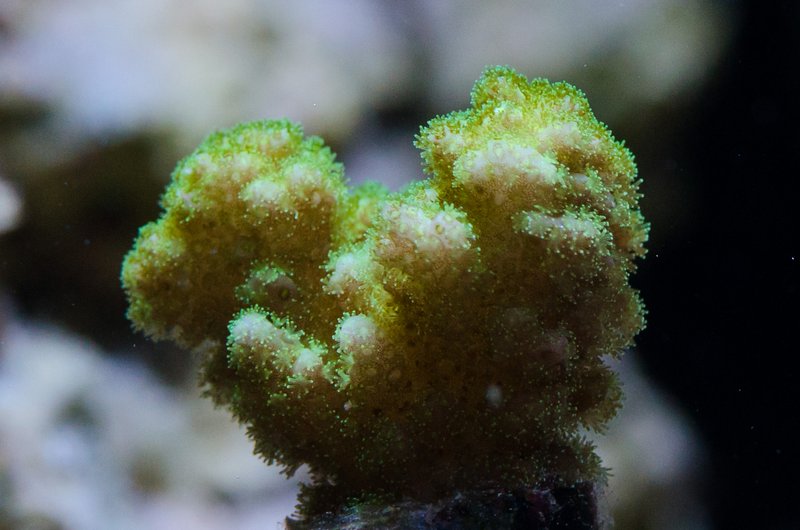 Buying a shoal of chromis is a risk - sometimes it works long-term and other times the numbers are gradually whittled down to 3 or even 2. I'll just have to hope that mine get on.
Top

The corals look great! Super greedy of me I know but any chance of a pic of the whole tank?
Top

Lights are going down now, here’s a quick snap with the phone. I’ll try to remember to get a better pic tomorrow! 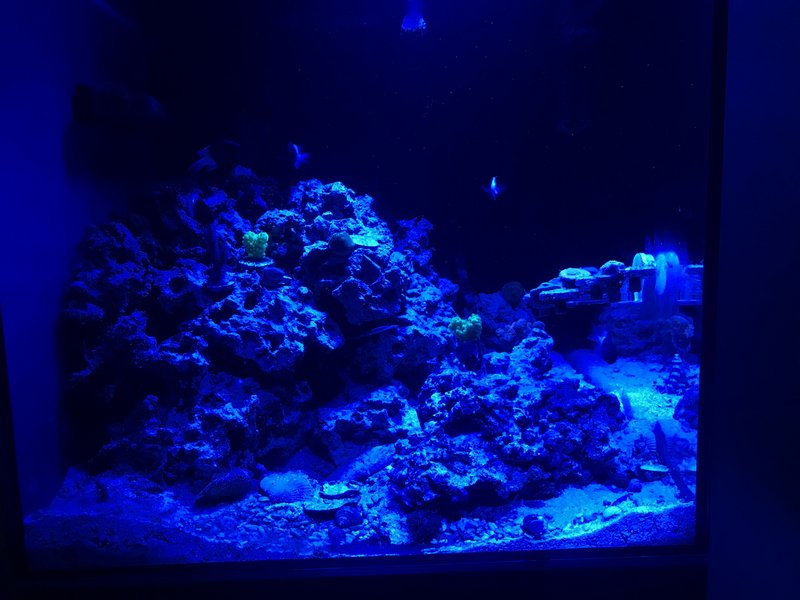 Never seen them before.

Return to “The Marine Aquarium”