A place to keep us informed of the goings on in your tanks. - Tank Logs
Post Reply
147 posts

As you suggest, I'd just arrange what's going into each compartment depending on its light requirements rather than reinventing the wheel. Whatever requires least light ends up in the outer edge sections. They are reasonably shallow boxes so hopefully there will be respectable light penetration in most of them.
Top

Thanks, KB - yes that's the approach that makes most sense ... but then I'm not blessed with a significant amount of that!

I think I'll dig out my light meter and get some real figures before deciding what to do. Somewhere in the museum I may still have some mirror-film. If so I'll try putting some either end of the tank and see if that makes a decent difference.
Top

I raised the Juwel light unit temporarily and dug out my meter, which reads in Lux.

If we number the compartments 1-5, from left to right, then the two compartments over which the Juwel LED tube extends only halfway are 1 and 5. These are the readings with the sensor on the tank floor in the middle of each compartment and with the glass covers on the tank :

The unit seems to perform a tad better on the left (where the power cable is) than on the right - or is that just my extremely poor maths showing up?

I searched unsuccessfully for mirror film then for a mobile mirror. The only one I could find was too big to fit flush against the tank, so I leaned it on with the 'lean' pointing upwards : 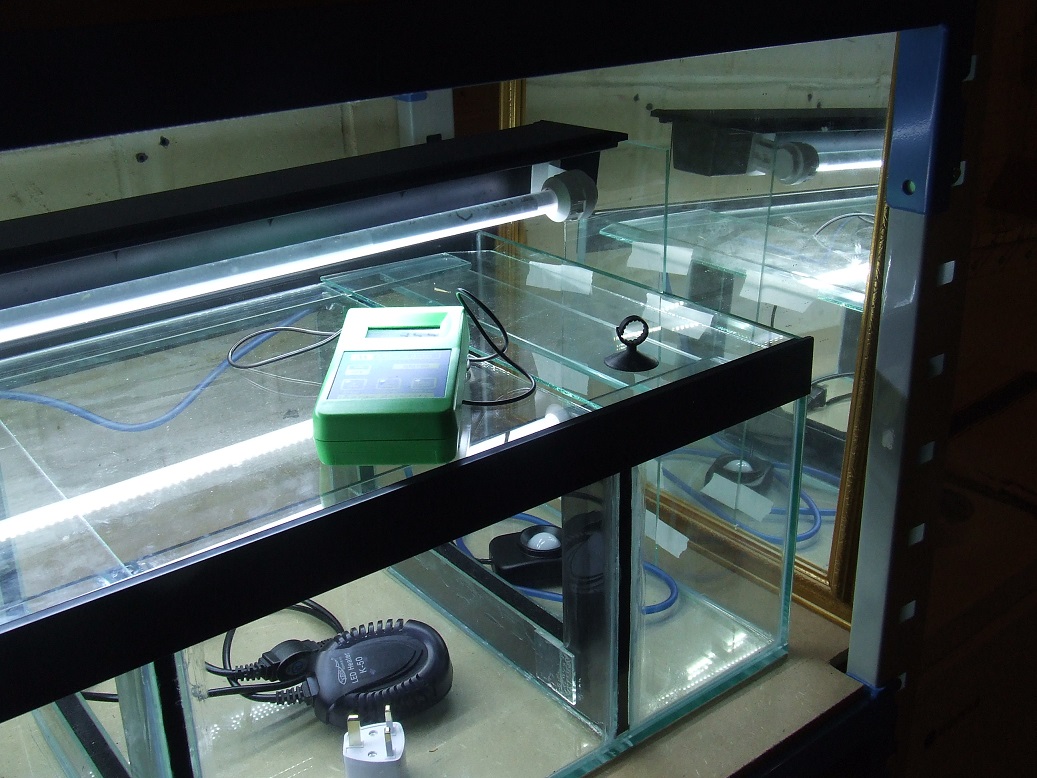 The value in compartment 5 + mirror was 3550 lux - an increase of 10%, I think (maths disclaimer applies). White or reflective insulation panels would poke the values upwards a bit ; and I'll see if I can source some more mirror film.

For comparison I then mounted one of the nano LED units over compartment 5 : 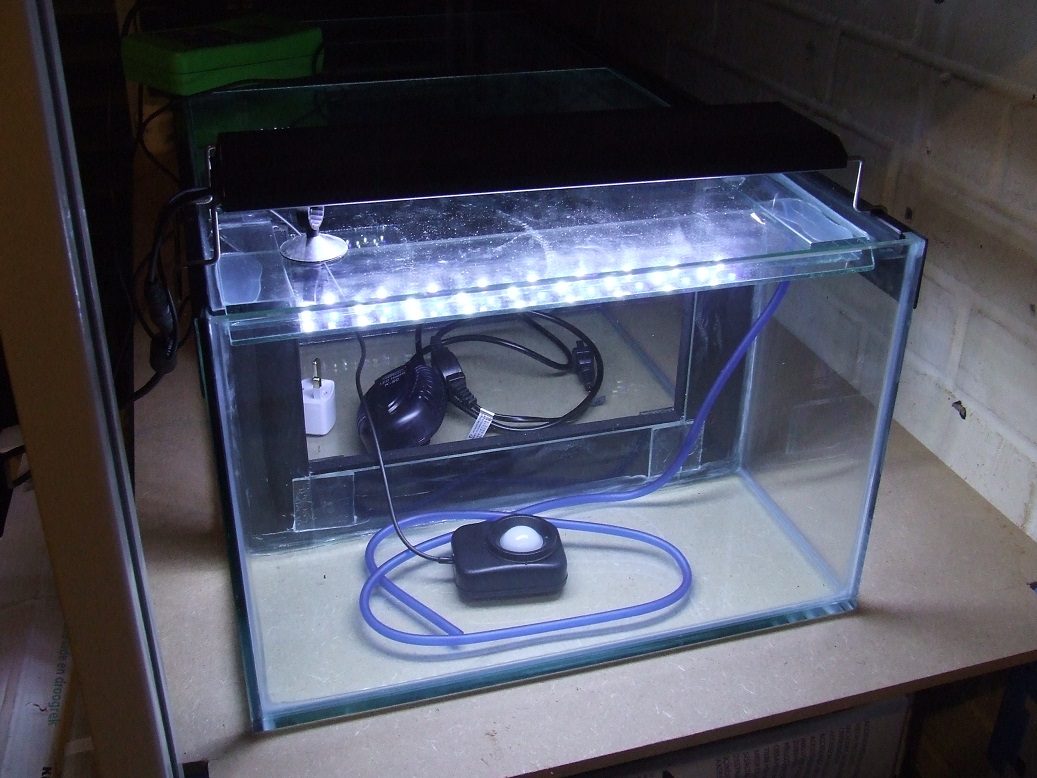 Its reading was 1180 lux. I'll make arrangements to use the Juwel unit then!


I'll allow the pet name: 'Fogerty' for this tank. [I just looked that up to check the spelling and I see there were actually two of them! Presumably brothers?]
Top

Thank you so much, I feel a lot calmer now!

Yes, Tom and John, I think they had a big falling out (because of the band) before Tom died. John, apparently still tours, he was over here a couple of years ago but I didn't find out until the gigs were done.
Top 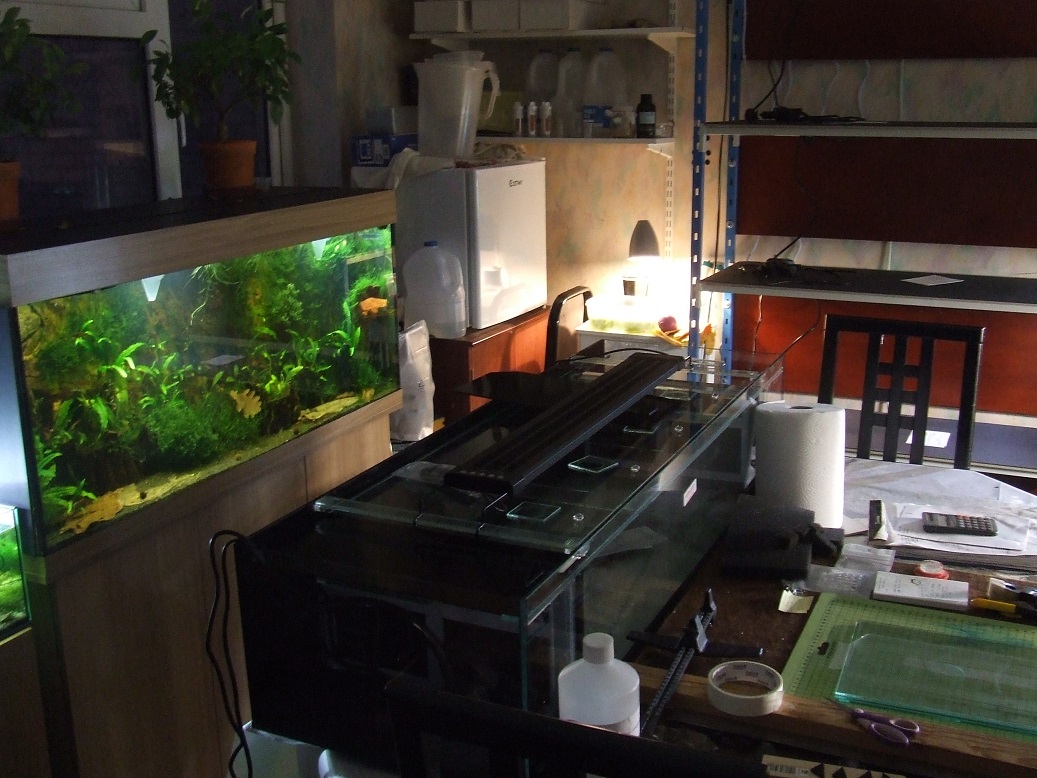 Racking now re-secured to the wall ; shelving and electrics reconfigured : 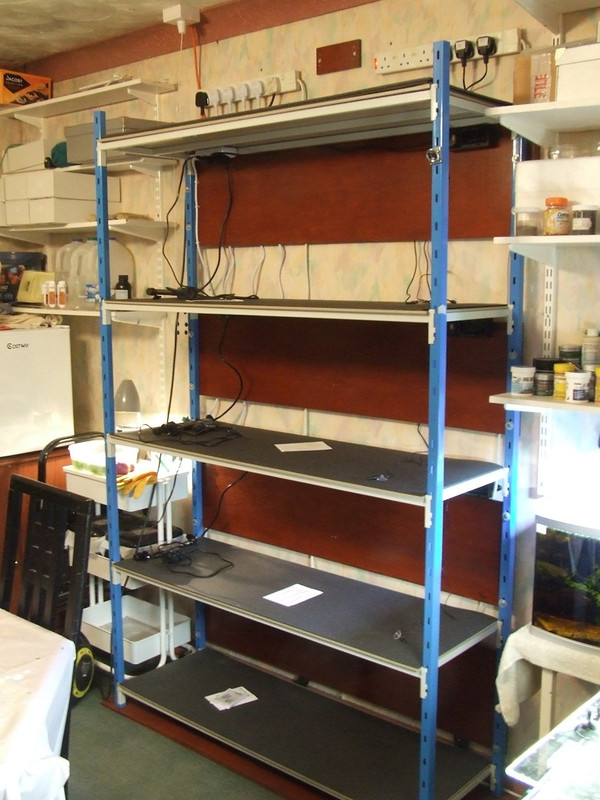 And a junkyard created for bits and pieces awaiting redeployment to Project Sheba : 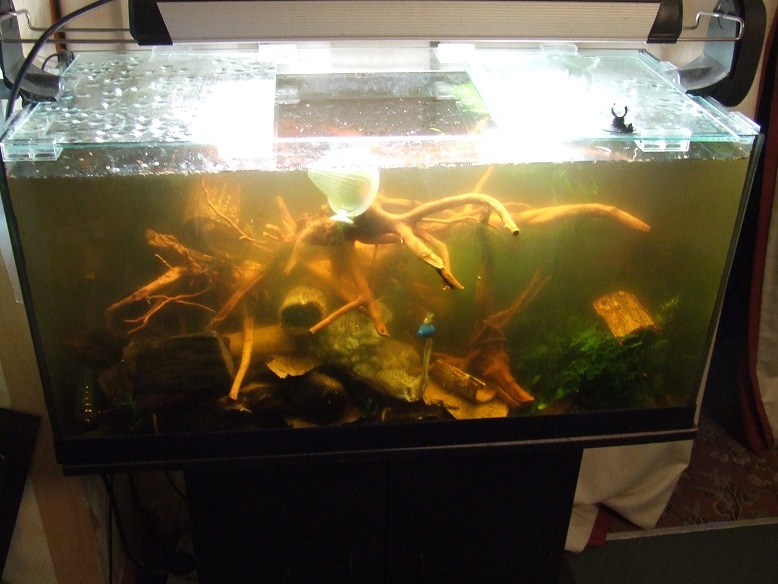 As mentioned upthread, Vale! Minimus (7 years old) is set to enjoy part-ownership of Sheba4. We'd tentatively agreed that it would hold Bumblebee Gobies ; that was quite some time ago it seems. Anyway, with Sheba 4's 'First Wet' ceremony approaching fast the less minded I am to faff about preparing water for them. With a bit of luck he's forgotten about the BGs and I can put in something appropriate to the water I already prepare and which will engage him! I'm happy for it to be a South American tank, so I'm toying with a couple of options. Any ideas welcome!
Top

Now that my PC is back from repair I can post some of the pics I've been taking in its absence.

Each tank in turn had another brief visit to the operating table to be finally fitted out :

I made a couple of foam plugs and threaded them on to the hose ... 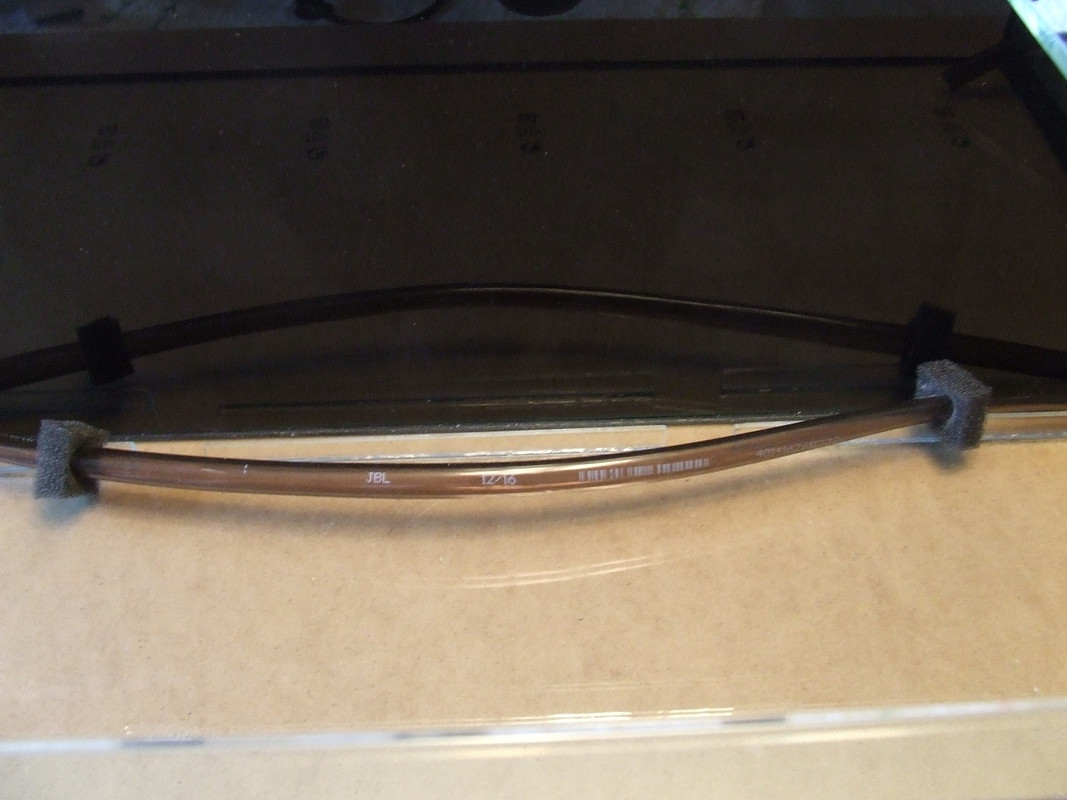 ... Once both ends of the hose are plugged in to their respective gubbins, the plugs will close the small gaps created when trying to fit round pegs (the hose) into square holes (where the hose passes under the compartment walls).

The gubbins at one end comprises : a pump ; a heater ; and a three-way tap 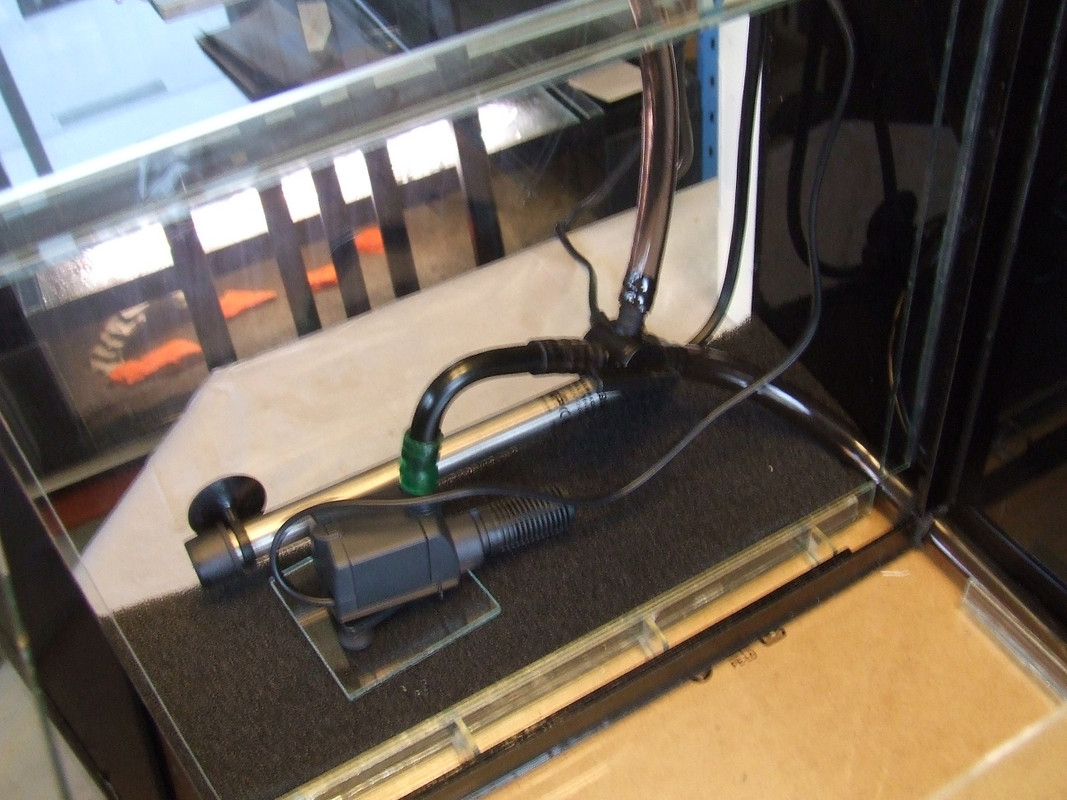 ... A 'fly' hose is attached to one arm of the tap. It'll allow either pumping out for water-changes ... 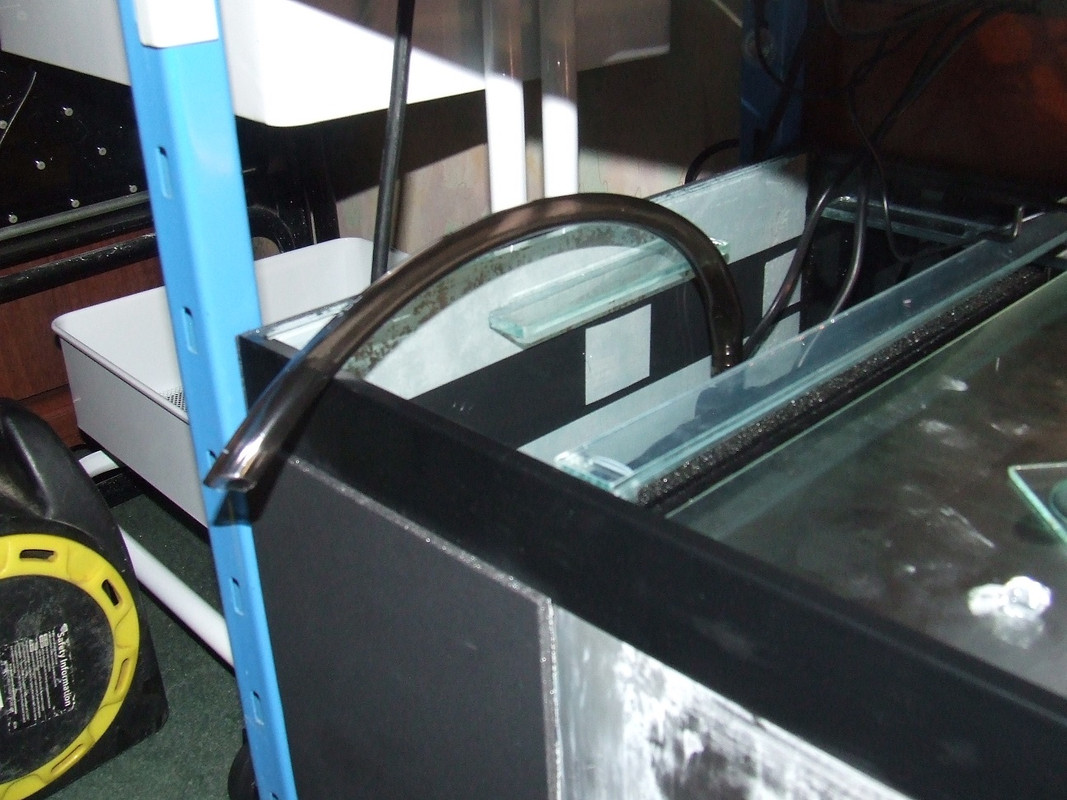 ... or the incorporation of a spraybar into the system 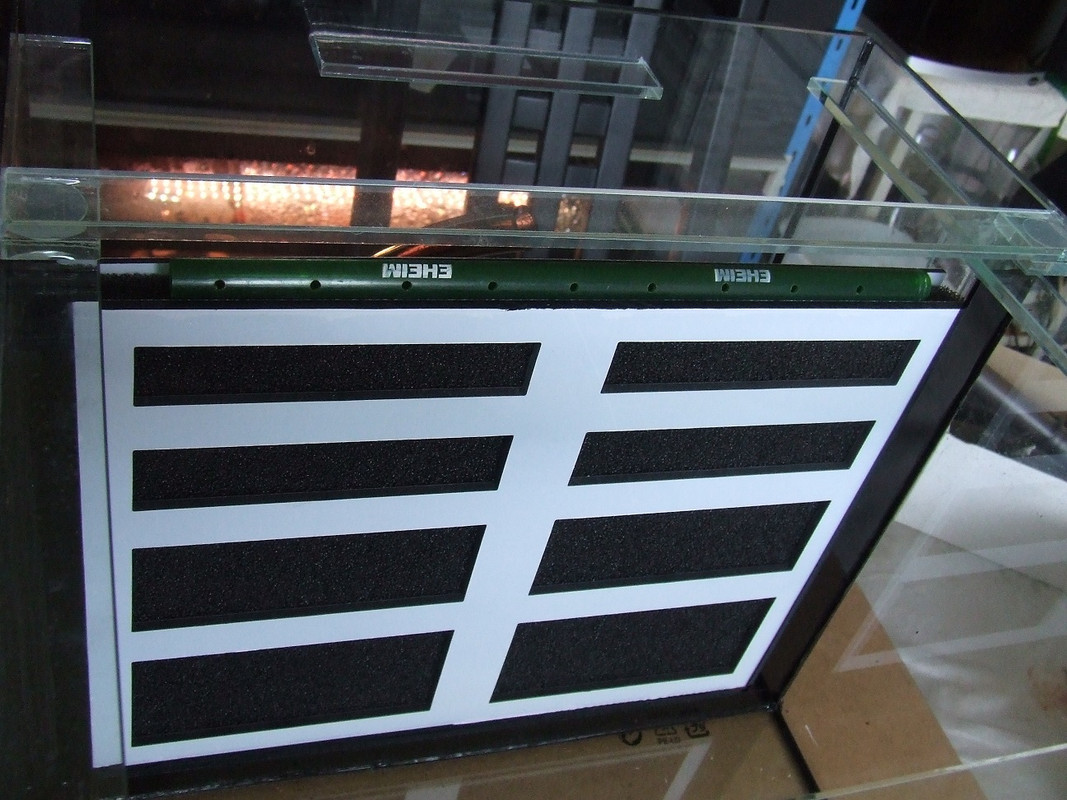 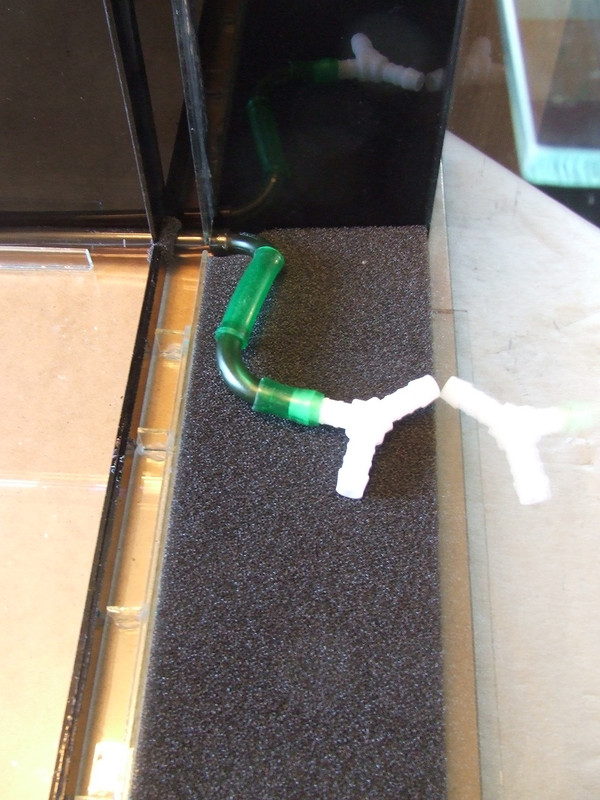 Media will be piled on top (and there'll be some at the pump end, too). This pic demonstrates with sponge but I'll have more, and different, media available shortly 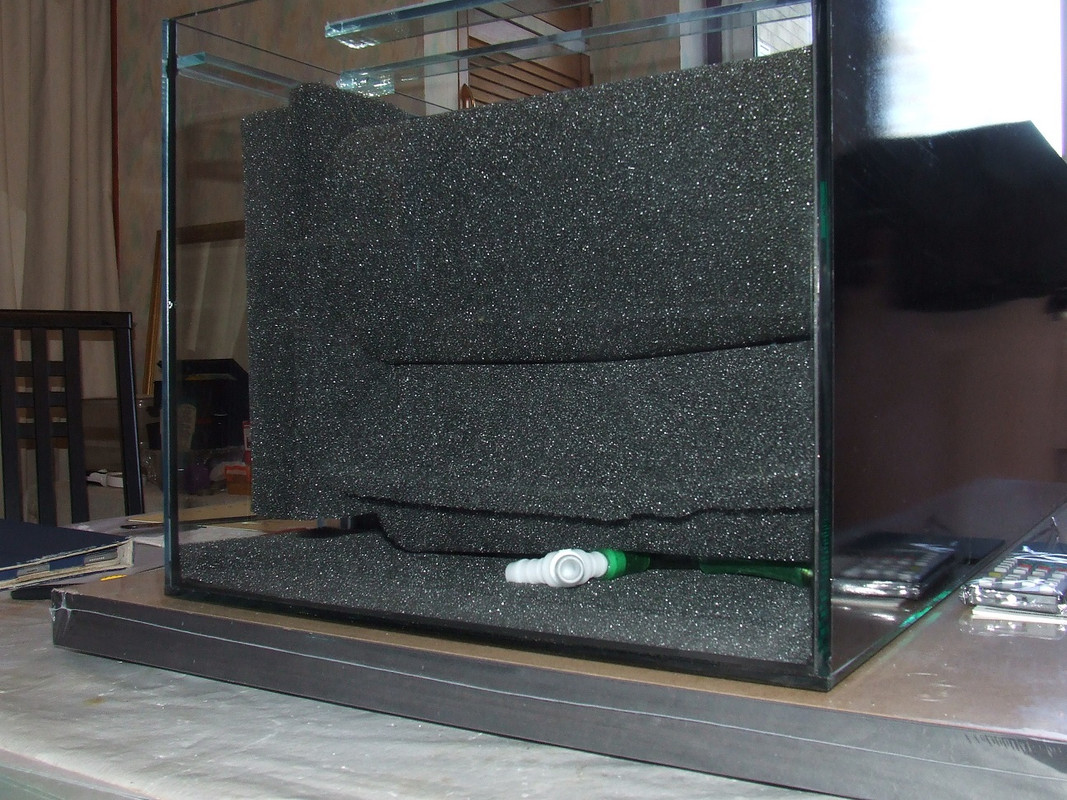 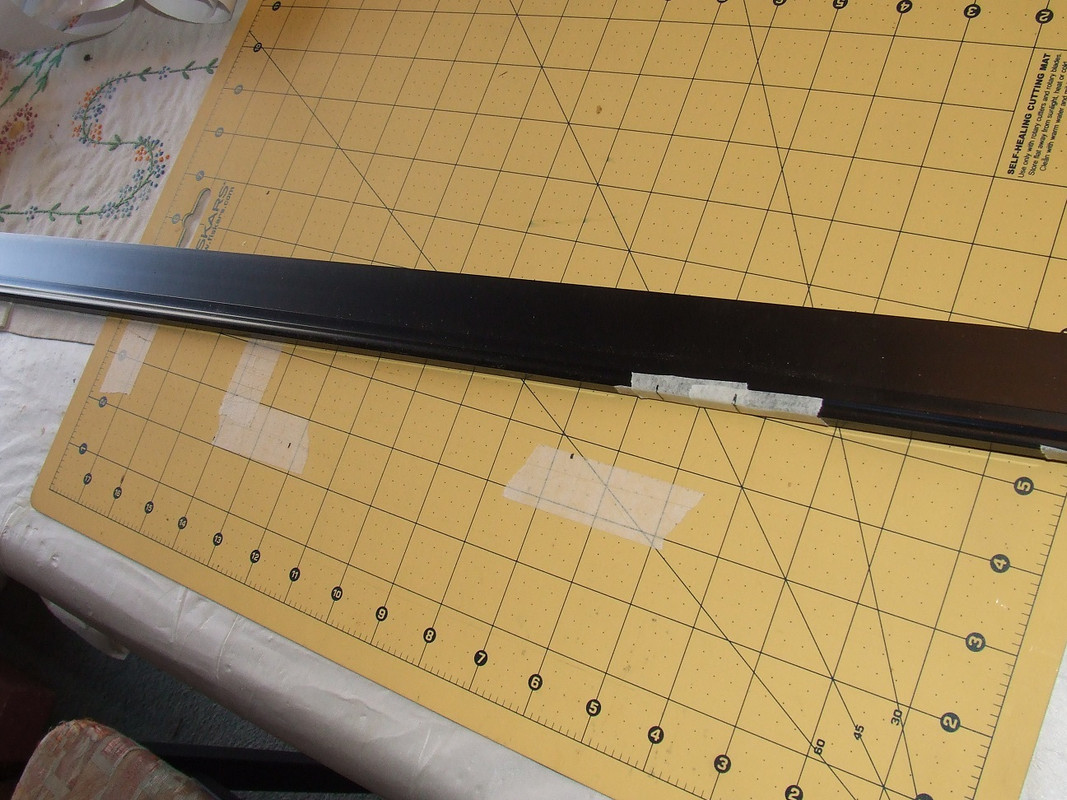 I don't know quite how I've managed it but I appear to have been given two extra lengths of trim. Doubtless they'll come in useful at some point!


The protective film was removed from the baffles and they were installed together with their sheets of foam (pic a bit blurry, sorry) 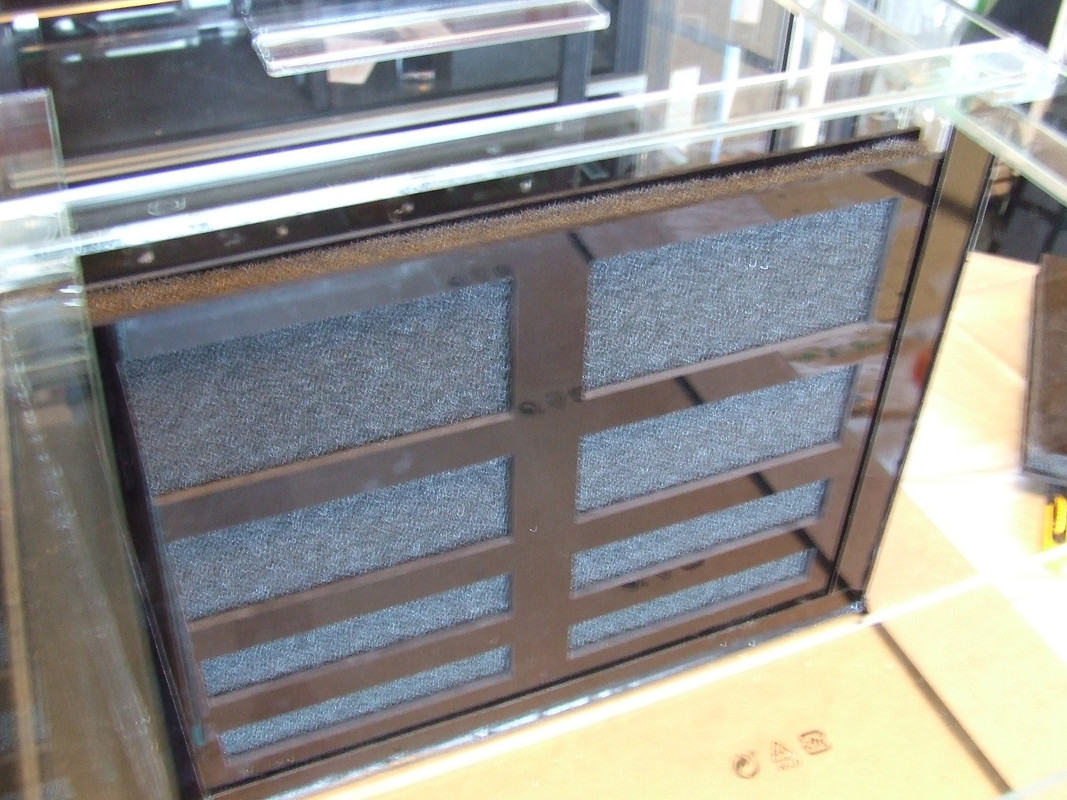 Foamboard insulation (5mm - better than nothing!) was added to three sides of each tank and then they were ready to go on the rack and have their electrics connected 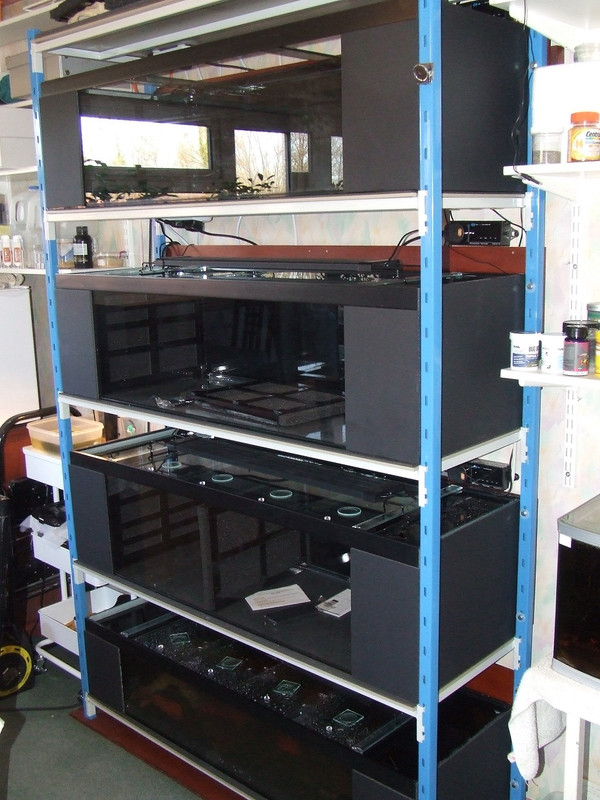 Sheba 4 is now wet and cycling. I have a group of C. duplicareus reserved for after Christmas. If I can find some Id like to add some marginatus pencilfish in due course. Substrate is about an inch of JBL fine sand (blimey it's dusty!). I'll try a few plants - I bought some 'nano' Vallis and some tenellus - and of course I've got loads of 'blackwater'- type stuff elsewhere that I can use if I want to. 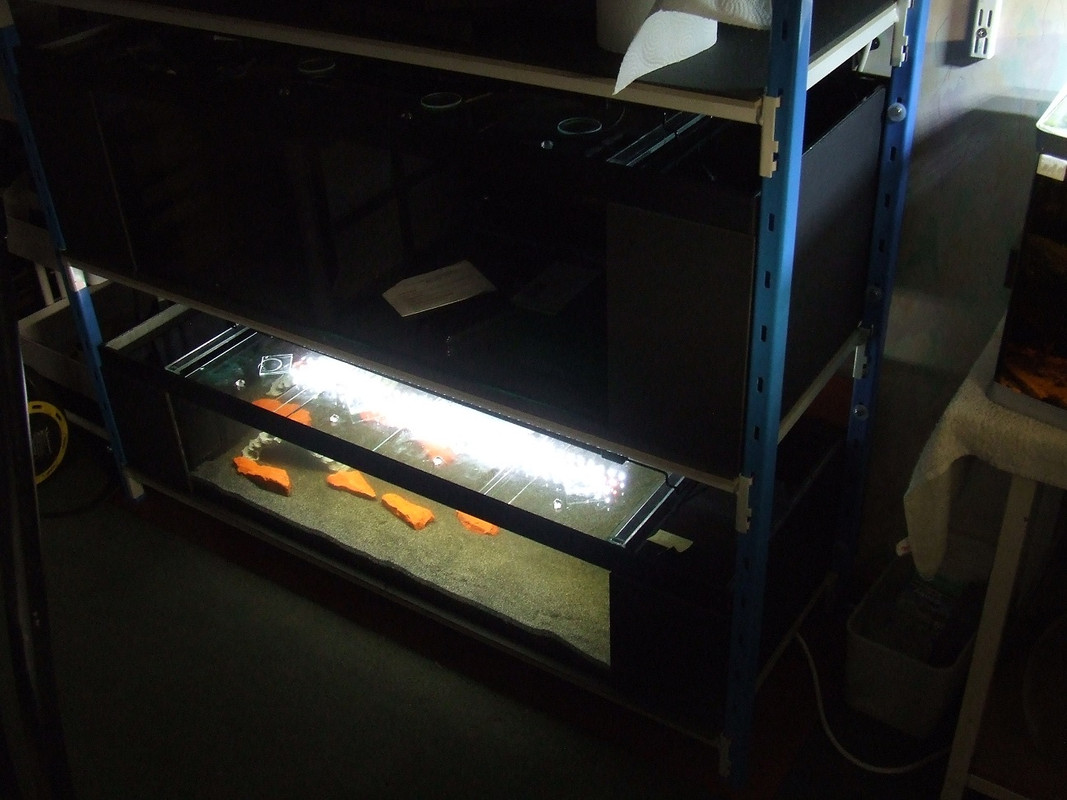 All systems go then

Looking very smart on the racking.

FM's : please ignore this post! It doesn't add anything to the narrative but it does have a specific purpose involving a non-FM!

Further explanation in due course if all goes well 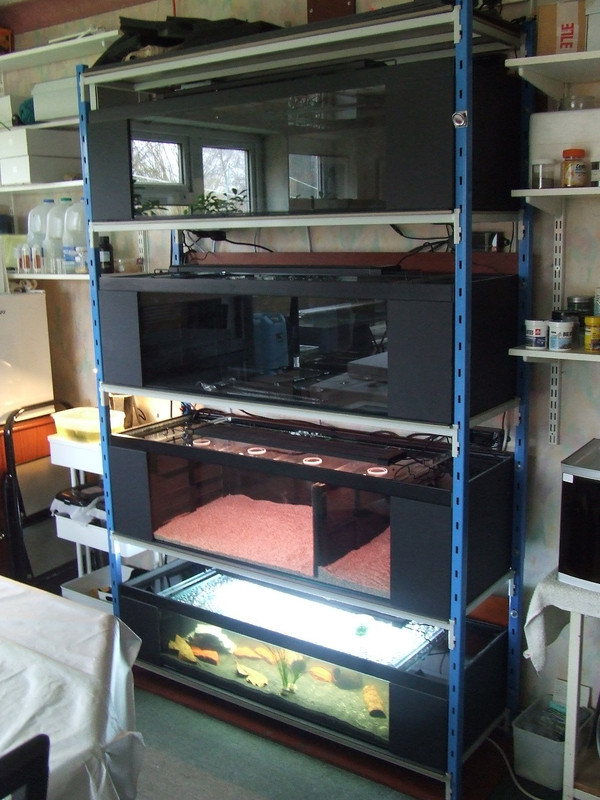