Hi guys got this ram a few ago from a friend and I'm kinda finding it hard to find out what kind of ram it is but in guessing it could be a young German blue ram but not too sure coz of the lack of colour on it. If anyone could help me identify it would be great. 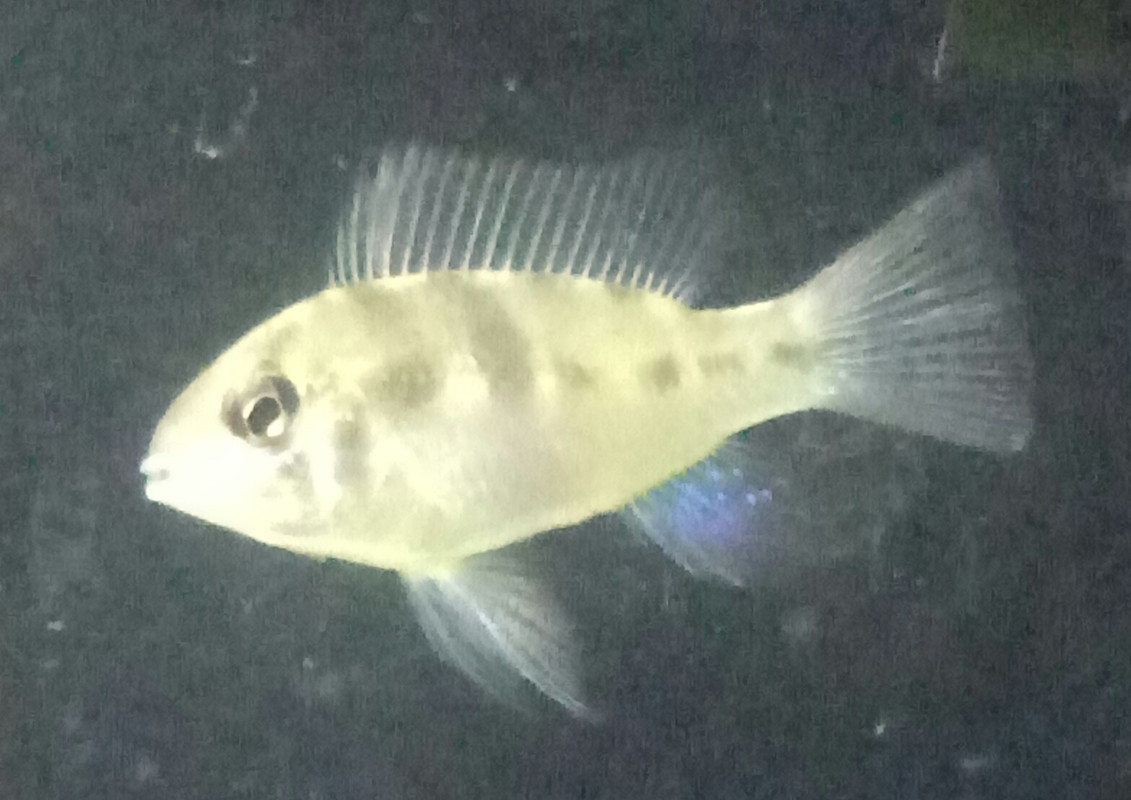 Hello and welcome to the forum

At first I thought it was a young Bolivian ram.
I'm not too familiar with the German rams though. What size is it?

I’m guessing it’s a bit stressed, which is why is hasn’t coloured up yet.
Top

Have they stopped breeding them in Germany then @black ghost ?

It used to be that they were called that because of where they were bred. They're also bred in Czech Republic (or whatever that's called now), The Netherlands and the Far East on a farming for supply basis.
Dutch ones are probably the hardiest, unless you can find locally bred ones.
They are pretty fussy about water conditions and need soft, acidic water with nitrates below 20ppm. That's normally because of the way they are farmed in vats of (basically) medicines. This stops the development of their immune systems and they get their own type of iridovirus. Wild caught would need that water anyway as that's where they come from in South America.

At first I thought it was a young Bolivian ram.
I'm not too familiar with the German rams though. What size is it?

hi thanks for the reply. It's about an inch and a half .
Top

That’s not actually true Ian. The German Ram was a particular strain developed in Germany around the turn of the century. It enjoyed a brief worldwide popularity, but the Germans discontinued its development shortly after. The strain doesn’t exist any more, and you’d even be hard pushed these days to find a picture of it.

Around about 2000, the Germans were trying to develop a Ram with as much black on it as possible (god knows why). Around about the same time, the Singapore farms were having big problems with their Rams and were having to use prophylactic antibiotics, which made their Rams very weak and disease-prone once they were shipped and put into clean (antibiotic-free) water. So the world turned to the healthy German Rams and they gained popularity.
In a bid to recover sales, the Singapore farms decided to rename their Rams “German Rams” and they’ve kept the name ever since. But the true German Ram isn’t around any more.

The German Ram had the following characteristics... the black markings (line through the eye, first few dorsal rays, first ventral rays, and lateral spot) were solid black and never faded. The lateral spot was much bigger than today’s Rams, line bred or wild caught, and either extended into the dorsal fin or there was a second black spot directly above it, extending into the dorsal fin.
It had no blue spangles, and was basically a yellow and black fish.

thanks for the reply's guys. She's doing pretty good so far. She seems to like chilling out with the angelfish and swim with them lol. Should i consider buying 1 or 2 rams for company?.
Top

What temperature is the tank at, and what is the pH and hardness? I wouldn’t add more Rams until you’ve sorted the cause of the (apparent) stress.
Top
Post Reply
18 posts