A place to keep us informed of the goings on in your tanks. - Tank Logs
Post Reply
118 posts

So I figure given the time it's taken to get to where I am, a tank log is about due.

Mid September I dug my old 5 foot tank out of Storage and into my new home. It took a week or so of me digging through boxes and bags to find the decor and substrate. But by the beginning of October I had the tank set up and just awaiting filter media and test kit and we were away. 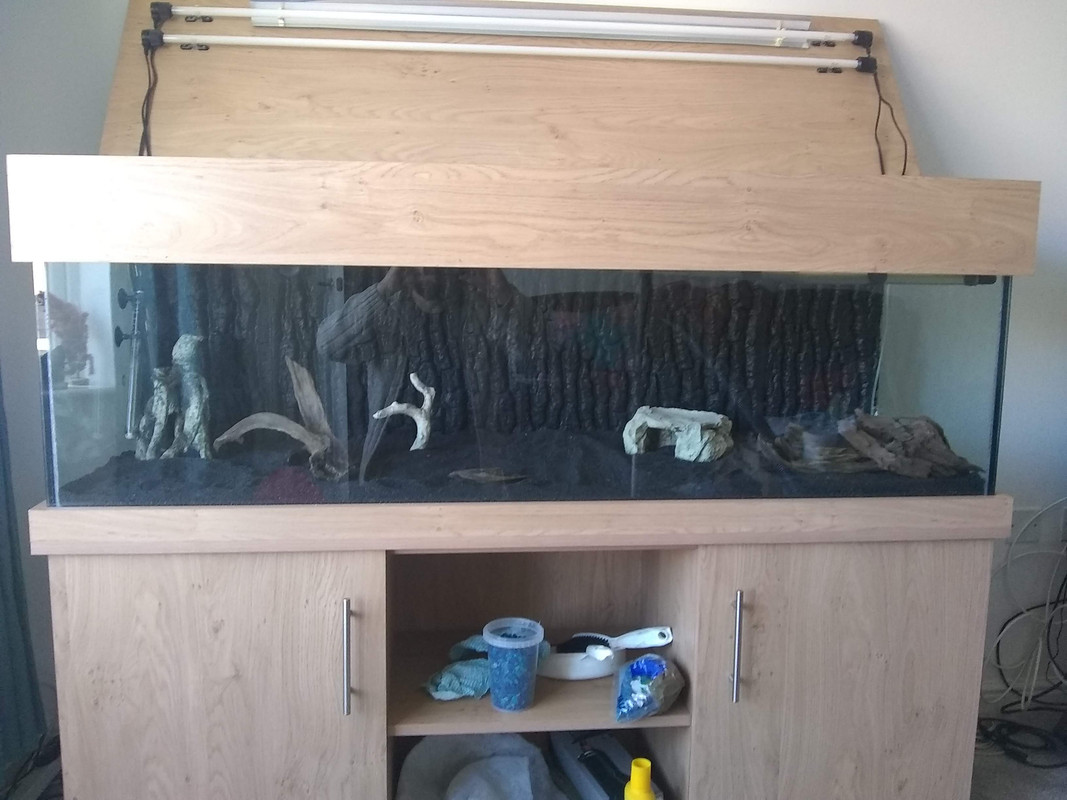 Test kit and media arrived and water was good 0/0/0 Ammonia/Nitrite/Nitrate. GH:6, KH:4, PH:7.4. Finish work at 4 on Friday and decide this weekend I'll start the tank 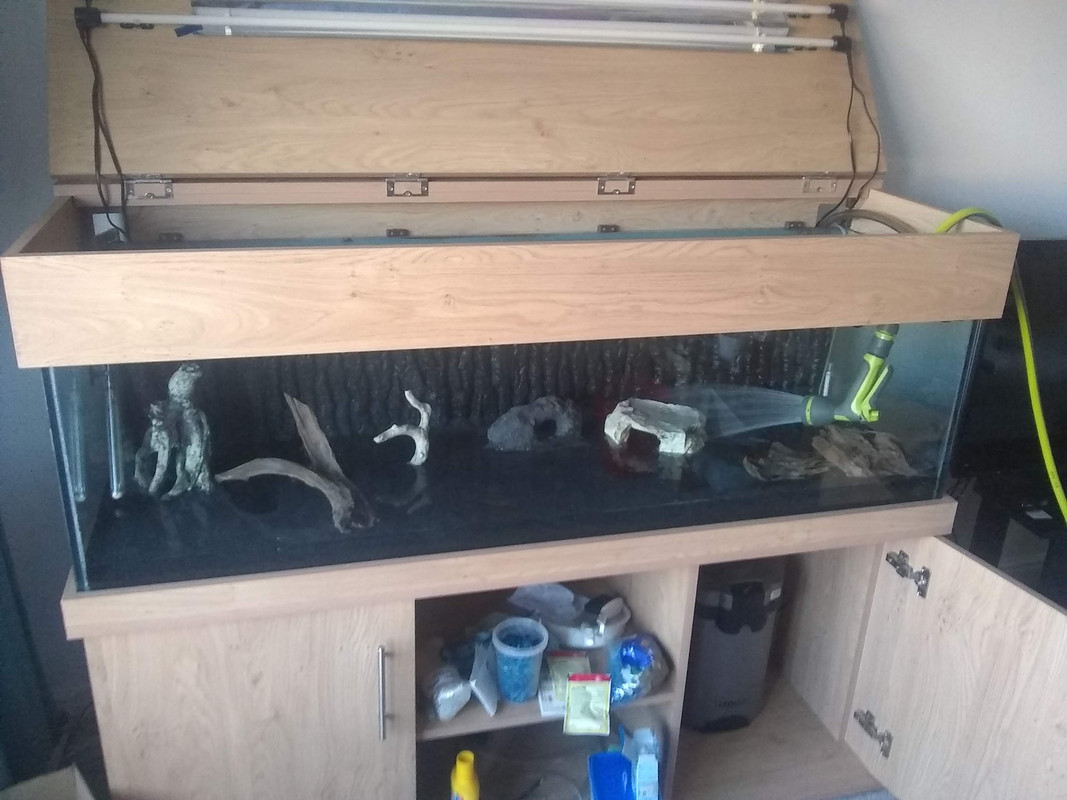 Filling up with cold because I don't have another option at the moment. Figure I'll put the dechlorinator and ammonia in when it's only a little full so they mix properly. (I had pure ammonia, sealed in double ziploc for 5 or so years when stored. Wow the blast to the nose opening those bags) 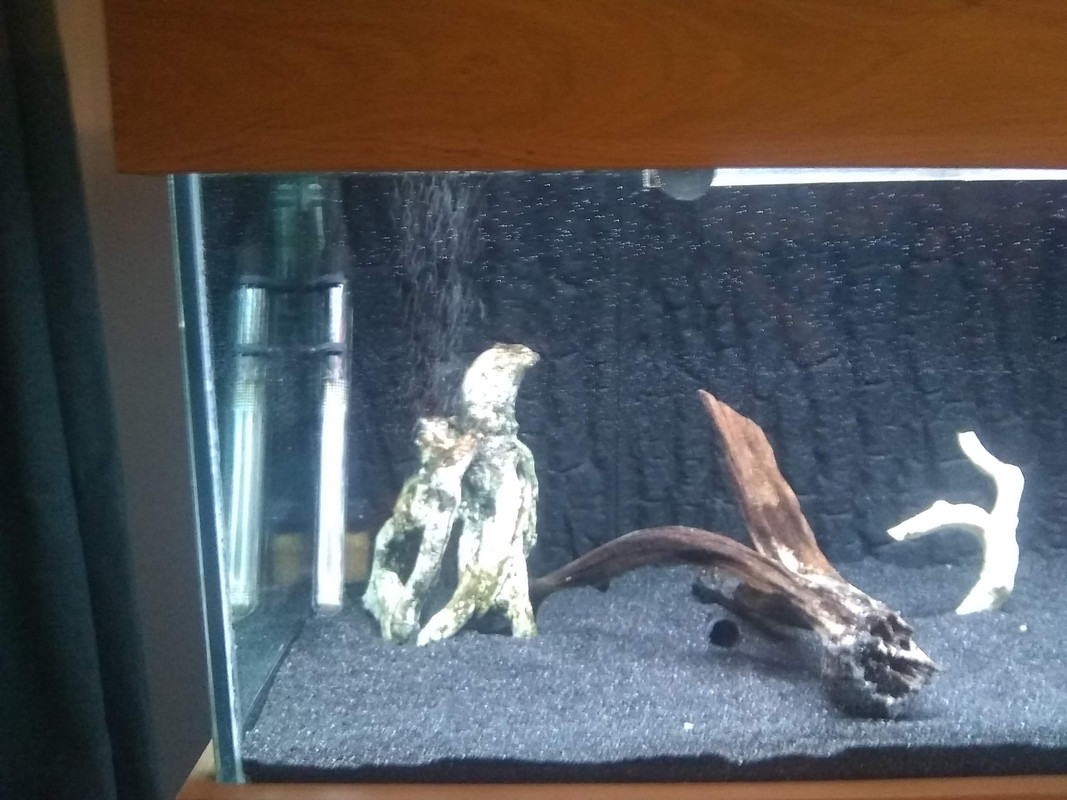 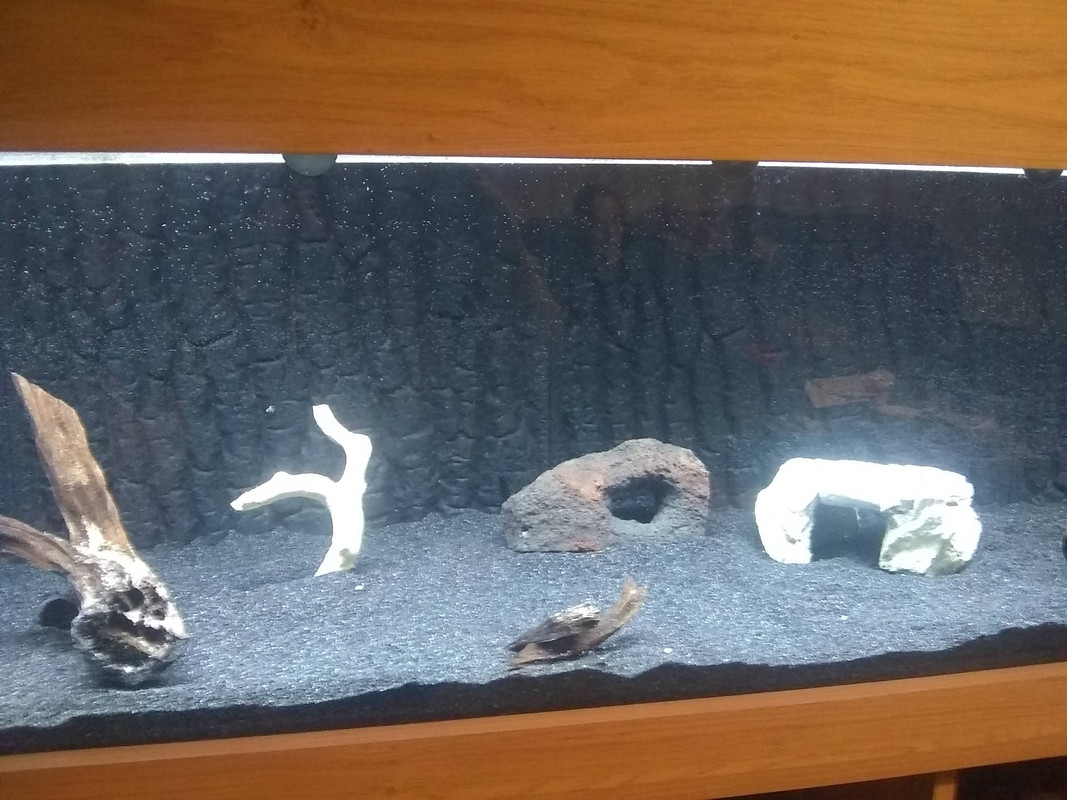 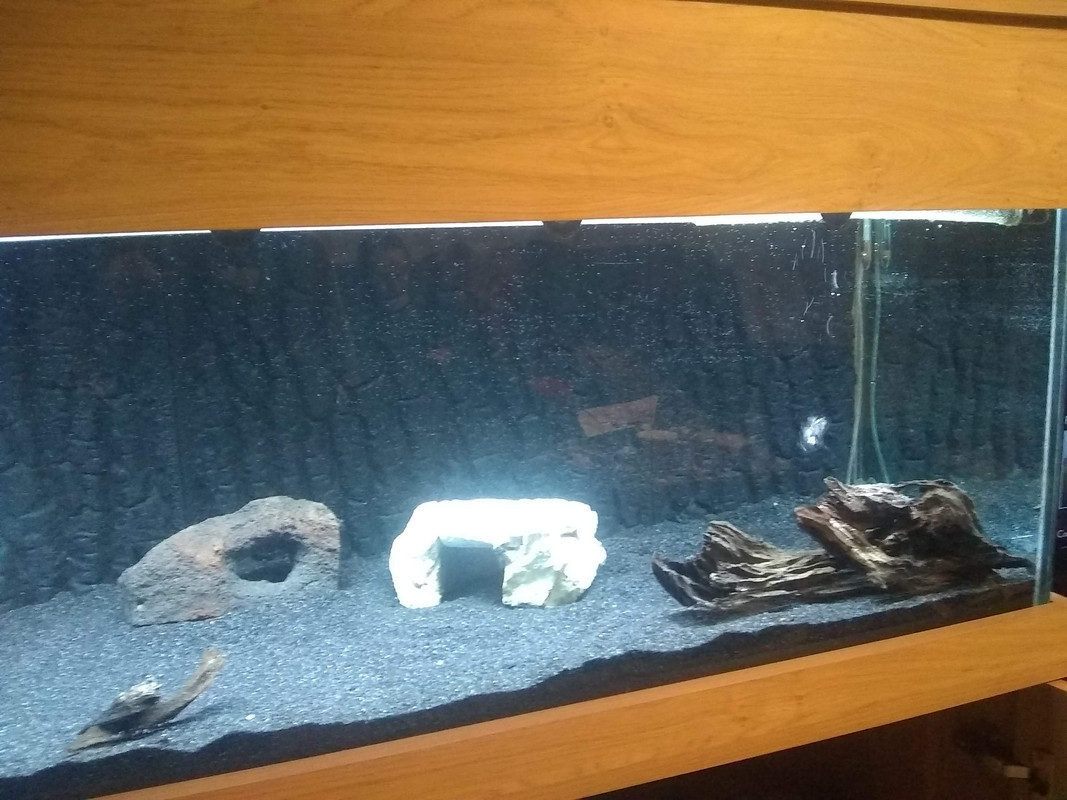 All looking good. And then I turn on the filter. Water spraying out the back of the filter all over the new carpet. Mrs Lick will not be pleased. 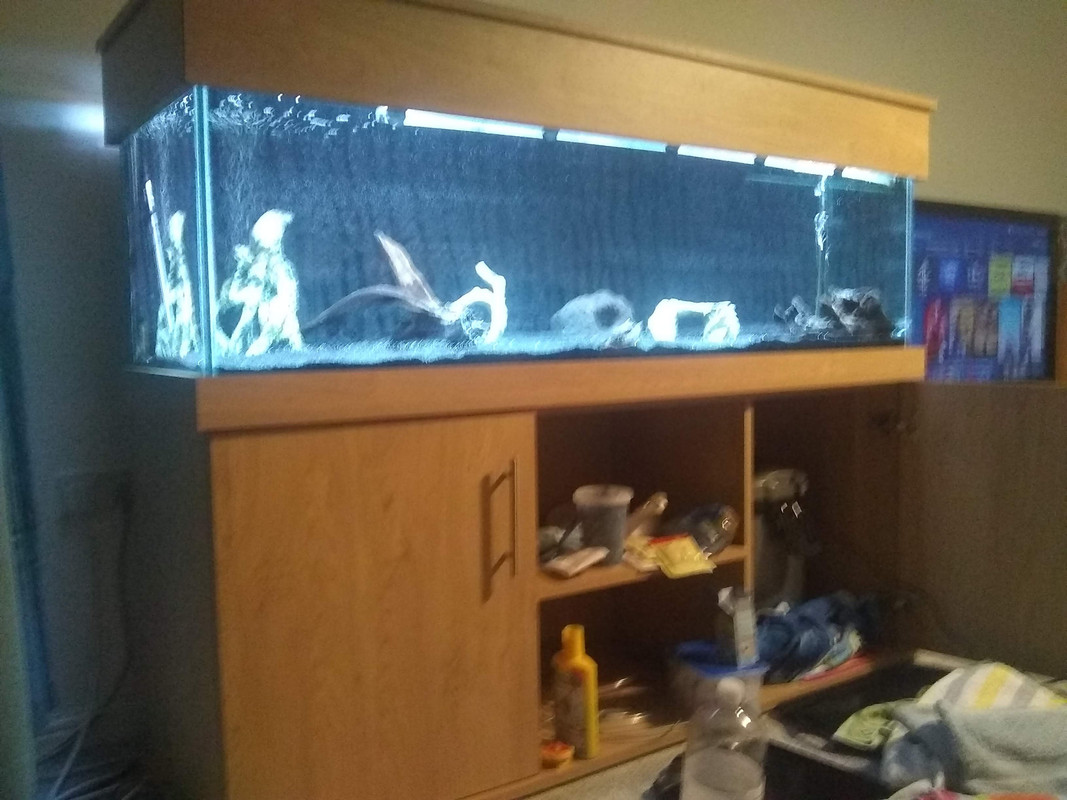 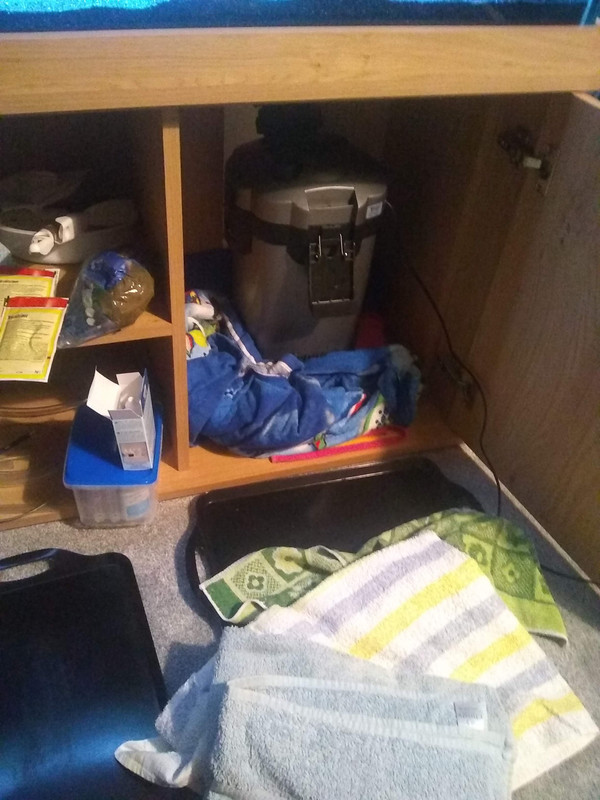 Spent most of Friday night and Saturday morning trying the filter. With no baskets, no leak. With most of the media removed, bad leak. With empty baskets no leak, until I turn the pump off and then bad leak. I went round all my LFSs and the only filters they had in were Tetratec EX 600 and 800 which are far too small and Fluval 207,307,407, FX4 and FX6. I really don't like the FX series filters and the 407 is just too small. I did consider buying Aquael Ultramax, Bigger is better. But I had some gift credit I could use to get a replacement EX1200 for under £100, so no brainer. Sadly because of a mess up with old vs new address it won't be till Tuesday I get the new filter. Here's how the tank is left at the moment (Those are the filter tubes tied above the tank to convince Mrs Lick there's no risk of siphoning the full thing onto the new carpet). 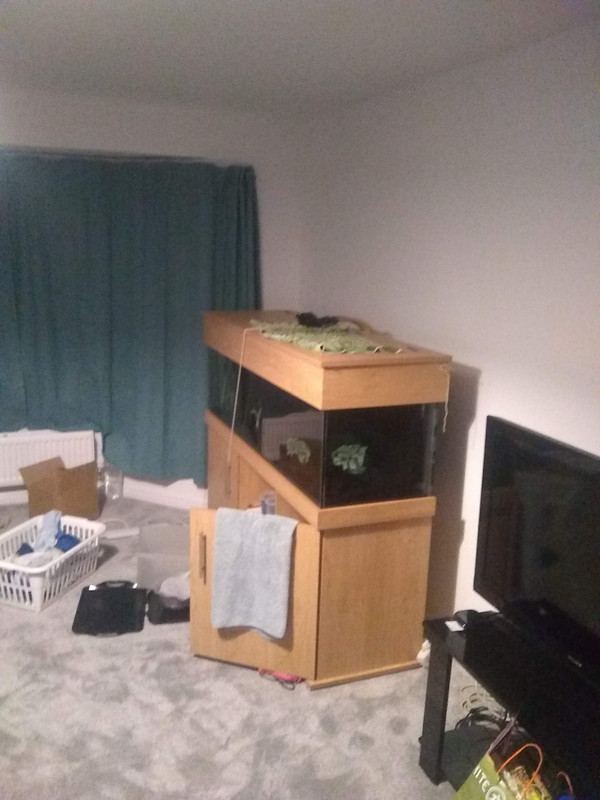 In the meantime the tank has gone cloudy as anything 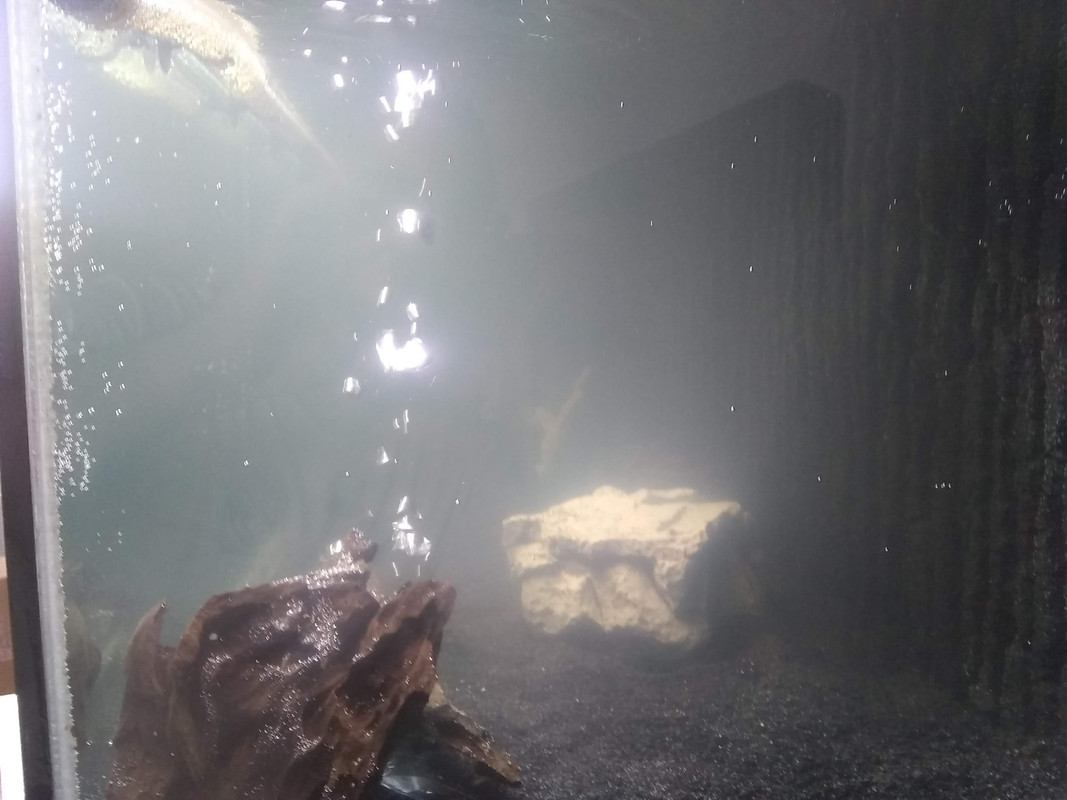 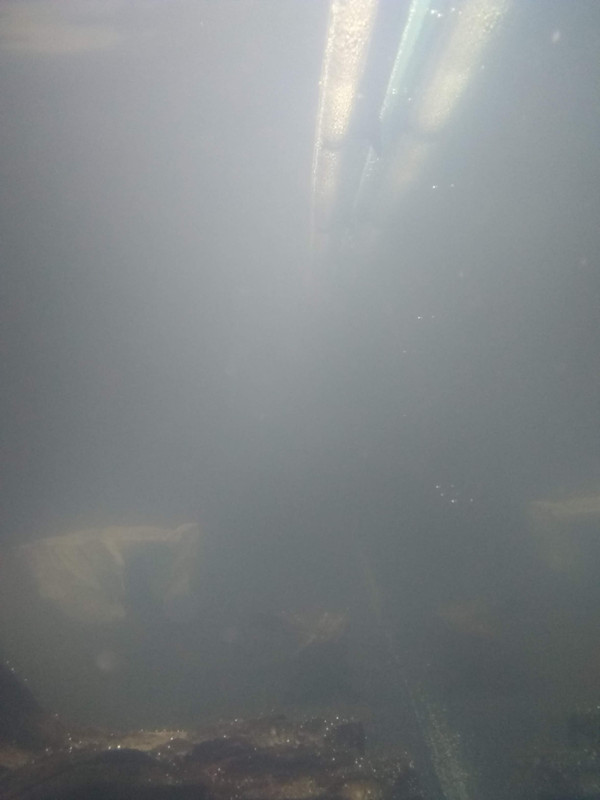 I've got Thursday & Friday off this week and the nearest LFS is having a plant delivery Thursday so all being well, filtration sorted, plants in, up to temperature and cycle started by next weekend. I need to drop the Fluval U2 in it and get a tank ready for quarantining new acquisitions.
250L: Tank Log
21 Panda Corys, Mixed Pair of Bristlenose Pleco and 6 - 14 <1cm babies, 2 Zebra Nerite Snails, 15 Amano Shrimp

Bristlenoses: I'd like calicoes or Oranges but Wild type or Albino are a bit more accessible. 2 or 3.

Cherry Barbs: Large shoal of them

Shrimps and snails: I'm still researching which inverts are best in soft water. I like Amano and Bamboo shrimp and would love to keep vampires but I'm not sure if that's feasible. And no idea what snails can survive with water this soft, although I'll bet ramshorns that smuggle in on plants can.

Top Dweller: Previously this would have been guppies but now that the water is so soft that's out the window. Current thought is Dwarf Neon Rainbows

Centrepiece: Really early planning on this one is some type of gourami that will do well in the community. (need to consider temperature overlap between Cory's and Gourami and temperament)

Planting: Eel Grass or similar in a large patch at the back right. Java Moss tied to the forked white stick to look kind of like a bonsai tree. Moss balls and maybe a shorter grass in the middle. Floating plants like Frogbit or Salvinia lashed to the left side to provide a dappled area. I'm sure more plants than that will be added over time.
250L: Tank Log
21 Panda Corys, Mixed Pair of Bristlenose Pleco and 6 - 14 <1cm babies, 2 Zebra Nerite Snails, 15 Amano Shrimp

Am I right thinking your in newcastle?

If you put a calcium source in the tank (cheapest is a piece of boiled cuttlebone for budgies, just break pieces off and boil them) you should be able to keep most inverts.
With softer water the caradina types will be better (stick with one type or they will interbreed back to the wild brown colour). Amanos should be ok as well with a calcium source.
You could dechlorinate/condition the water when it's full - it'll mix as soon as you run the filter. Adding the ammonia after it's full will make sure you add the correct amount and not overdose.

New Tetratec Ex1200 Plus has arrived. It's missing the pre-filter sponge for the intake (I never had one on the old one when I got it second hand). How much difference do prefilter sponges make? Is it worth making a fuss to get one or should I just leave it for now?
250L: Tank Log
21 Panda Corys, Mixed Pair of Bristlenose Pleco and 6 - 14 <1cm babies, 2 Zebra Nerite Snails, 15 Amano Shrimp

they help if you have fry or shrimp, otherwise they just clog up quickly

Back to Basics
Back 2 Basics
Fr499y’s shrimp tank

New Filter arrived yesterday, was missing some pieces which I didn't need but talked the seller into a further discount on it so Bargain

. Got everything plumbed up by about 6 last night and no leaks. It was even cloudier by then.

The Bacterial start balls that I had were escaping the filter and blocking the spray bar so I'll need to look out for that over the next few days. I also want to shorten the tube at the right side of the spray bar so that there's a larger still area of surface for floating plants at the left end. I also moved the U2 to the other end because it was creating an odd flow pattern at the front left. One of my air pumps, Aqua One Stellar 110 Series II, is really noisy so I don't think I'll be using it long term but just trying to get as much movement in the water as possible for now. It powers the airstone that's not on in the above gif.

Was aiming for 28 degrees to speed the cycle along but overshot (I forgot how far off the labels were on the Hydor) and the tank was about 31 this morning according to both floating red ball type thermometers. I did the first tests, about 18 hours after adding filter (I forgot to check how much I had dosed the ammonia to but by the calculator it should have been around 5-6ppm). Note the card is flipped in the below picture so the relevant colours are adjacent the tubes. This means Nitrate is left, Nitrite middle, Ammonia Right. 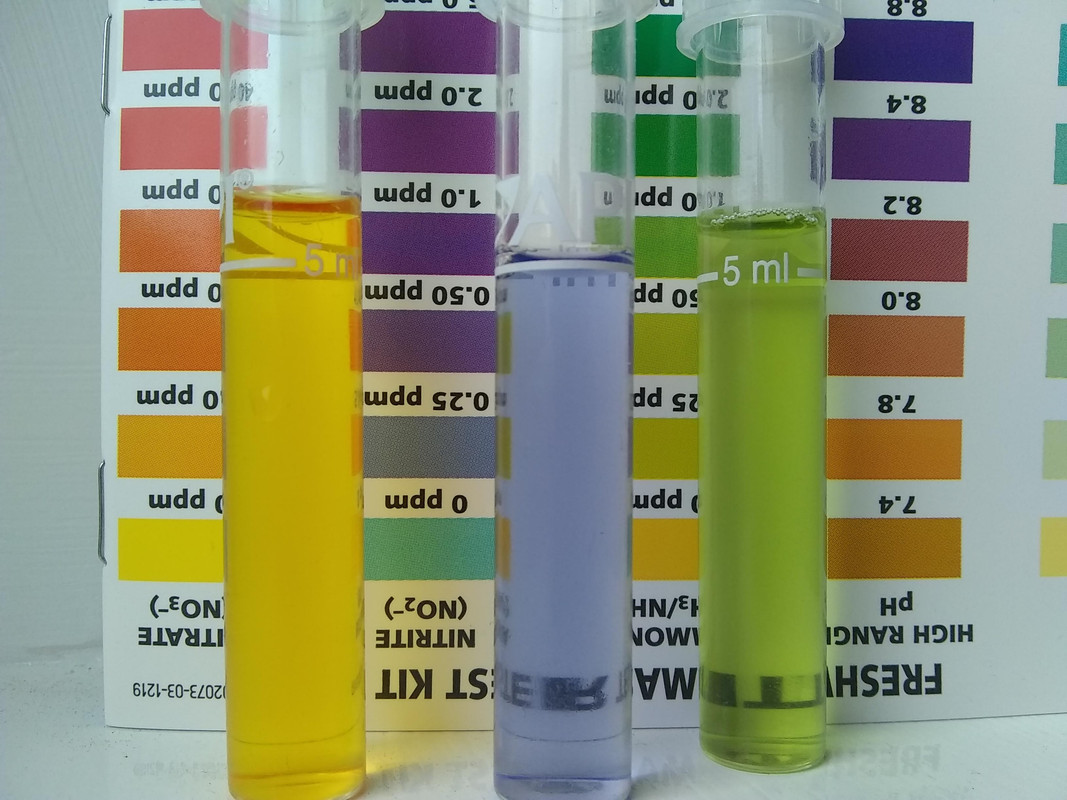 I read those as 0.5 Ammonia, 0.25 Nitrite and a little over 0 Nitrate but not much. I redosed with 1.5ml of pure ammonia. and retested. 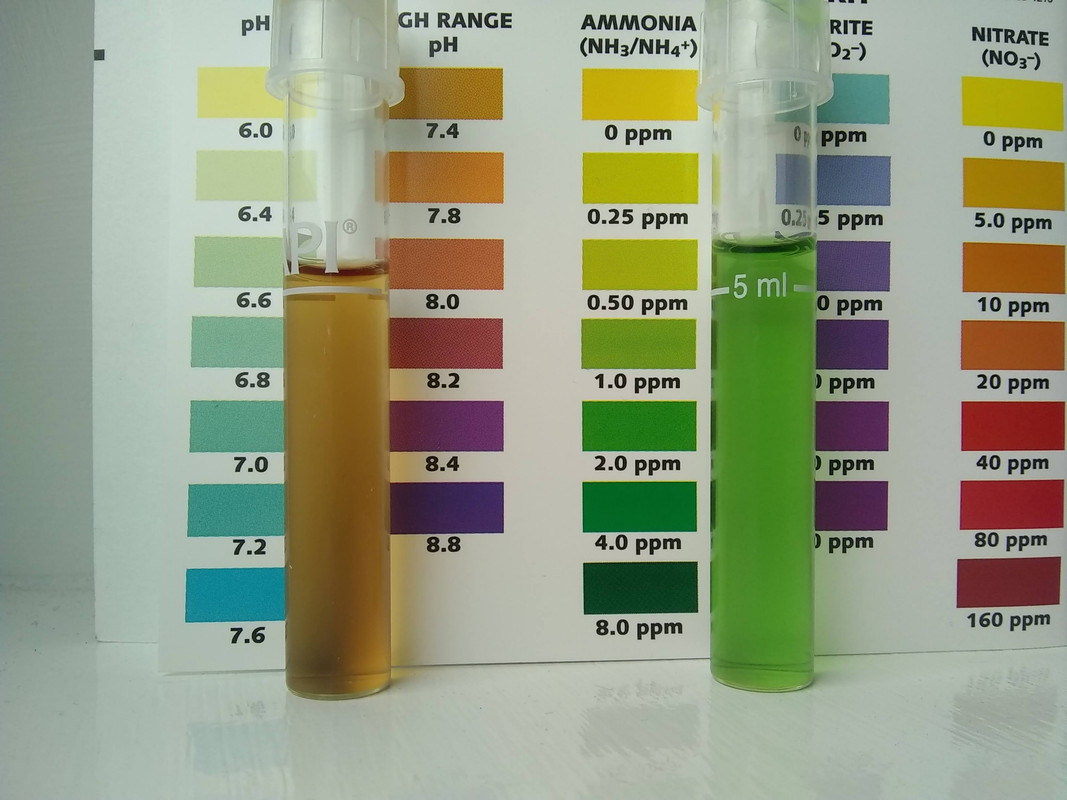 This looks like 2ppm to me, whereas the maths says it should have been almost exactly 5, so I may need to up the dosage. The high range pH was there because the normal pH before had looked closer to 7.6 but I'm reading that as 7.4 so I'm still in the 7.2-7.6 range.

The water is significantly less cloudy this morning, although the living room now has a distinctly fish tank smell. That will in part be the media that's not in the filters and the old filter drying out. But it's a comforting old smell. 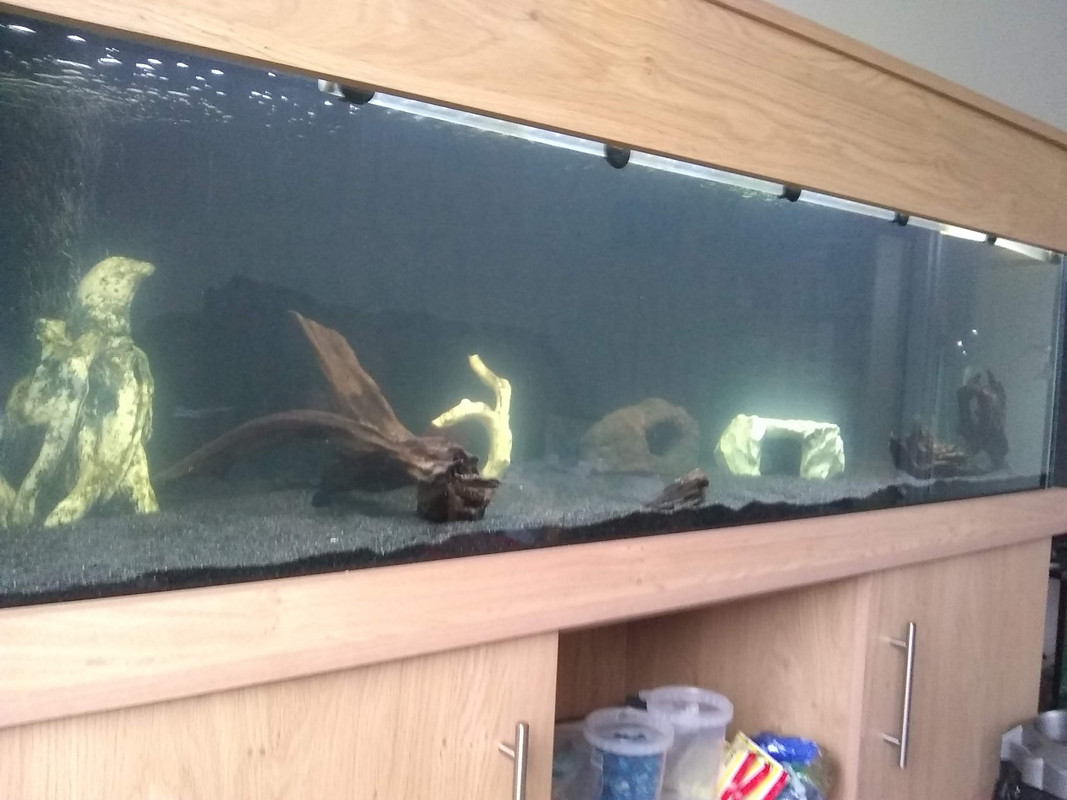 Cannot wait till Friday and I'm going to raid MA for plants. I might take a trip over the river to the big P@H on Thursday to see what plants they have as well. New lockdown rules permitting.

I've started cleaning off the spare parts for a quarantine tank for when I start adding fish. Because I don't really want substrate in the quarantine tank I might start the tank off with the cories and bristlenoses so that the quarantine tank, full of plastic plants, is just for the barbs, rainbowfish and gouramis in turn. Just need to decide which of the three other tanks is QT. I would use the smallest tank although technically that's not mine, I've been storing it for an old room mate for the last half a dozen years...so it's mine?

All this Fish Tank stuff has got Mrs Lick talking about getting a tank with something to harden the water so she can keep some guppies in her hobby room, which I think is a perfect start for discussions about this being the shared tank and if she has a personal tank then I can also have a personal tank...three tanks?

Hm - in all my years of fishkeeping I never once thought of putting the spray bar at the front, aiming the water towards the back. That is something different (for me) - will be interesting to see how it looks with plants and fish in the tank.

Return to “What's happening in your Aquarium? - Tank Logs”